Poor Ed Miliband. He is not having a very good day. There he was thinking that a little light aping of George Galloway's antics would secure him the Muslim bloc vote in Glasgow's forthcoming local elections, but his "dhimmitude lite" approach seems to have left resident Muslims - one wealthy Muslim in particular - unimpressed. Muslim millionaire Mohammad Ramzan has switched his backing from Labour to the SNP. Embarrassingly for Miliband, Ramzan is both brother of ex-Labour MPMohammed Sarwar as well as the uncle of Anas Sarwar who happens to be Scottish Labour's deputy leader.

Labour's allure in its Glaswegian heartland is beginning to fade, and its power to crumble, Michael Crick noting that the party lost control of Glasgow Council a few weeks ago and that the SNP is exerting a strong appeal to traditional Labour voters. It has taken a while for indigenous Labour supporters to notice that "their party" is theirs no longer, and is instead a party obsessed with courting ethnic minority votes and bestowing privileges upon members of ethnic minorities. In Scotland at least, it would appear that what is now a misplaced age-old Labout tribalism is finally disintegrating. What is equally interesting is how Labour's automatic assumption that it can secure the Muslim vote is dissolving, with Ramzan's move here, and Galloway's success in Bradford West, seeming to indicate that it can no longer be taken for granted. Still, these changing political realities do not seem to have awakened Miliband to the folly of Labour's policy of non-indigenous ethnic preference, and its recent destructive embrace of "faith" as a valid facet of identity and basis for policy. Balkanisation proceeds apace.

Into this post-industrial and post-ideological (in terms of the big three parties in Britain) age, the new sectarian divide in Glasgow is not between Protestant and Catholic, but between Muslim and non-Muslim as in so many other cities across Britain. Some might term the distinctive sense of Muslim identity "vibrant" and "assertive", whereas others might perceive many of its characteristics to be alien and aggressively domineering. Nonetheless, Labour's love of multiculturalism will not suffer the party's members to entertain any apprehensions about the overwhelmingly positive and cuddly contribution of minorities to life in this country, hence Miliband's craven courting of the Muslim bloc vote which has this evening led him to a Glasgow mosque. There he will be inaugurating a new group named Muslim Friends of Labour in Scotland. He will doubtless have warm words to lavish upon his Muslim hosts, but what thoughts will his audience harbour of him? How readily might they turn their coats and become Muslim Friends of the SNP?

If Labour support slumps in Scotland next week, how secure will Ed Miliband remain in his post as Labour leader? Ed Balls, amongst others, is probably feeling quite happy. 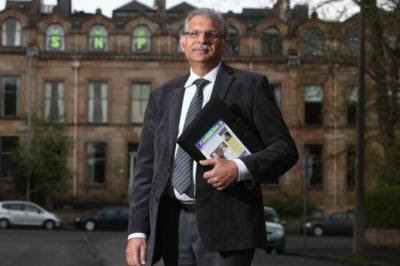