Luton in ‘harmony’, or Luton in discord?

“Read all about it! Five terror plot suspects arrested in Luton!” Yes, yet again dear reader, police have descended upon a number of addresses within a certain “community” to arrest a group of men alleged to have been planning to inflict death, injury and general misery upon the host population, simply because we do not share their warped backward Islamist ideology. So wearisomely familiar and routine have such arrests become, that it is increasingly hard to be moved to comment upon them, which is a worrying sign in itself.

Scarce a week seems to go by without another Islamist plot being uncovered, and for all of the media’s professed concern about a potential network of crypto-Breiviks lurking in the shadows waiting to butcher the innocent, this thankfully remains as firmly in the realms of fantasy as Breivik’s resurrected ‘Knights Templar’. Breivik the butcher, mercifully, remains an army of one; a genuine clerical fascist; a warped individual who carries within himself more the spirit of Mohammed than that of Christ; a man possessed of a lust for blood, rather than a desire for peace. Breivik is, in many respects, a mirror-image jihadi. A man who truly loves his people would never seek them out and methodically murder them, irrespective of any ideological difference. Breivik is no nationalist. He has made of himself a wretch and a perpetual outcast.

And what of the men in Luton who have just been arrested? What will they become? For the English, if these five prove to be found guilty, then true justice must surely demand that they be shunned and returned to their land of ancestral origin. Amongst their “community” however, how will they be regarded? Will they be ostracised or fêted? The likely attitude, sadly, is predictable, for although many of Luton’s Muslims will refrain from lionising these aspirant killers, significant numbers of them will not. As sure as night follows day, in the weeks, months and perhaps years ahead, their advocates will be heard, and they will shriek at us as if we were the criminals. Luton, according to an initiative funded by the town council, is in “harmony”. This arrest, together with this medium-sized town’s Muslim population having provided a home to the Stockholm suicide bomber Taimur Abdulwahab al-Abdaly, one of the fertiliser bomb plotters and a facilitator of the 7/7 bombings, attests to the fact that there is no such thing. It is also home of course, to Sayful Islam. For observers to profess to be perplexed at why Luton should have given birth to the EDL is thus disingenuous to say the least.

In a little under two weeks’ time, the EDL plans to demonstrate in Luton in celebration of its third anniversary. What impact, if any, will these arrests have upon that day, Saturday 5 May? Channel 4 may have dubbed Stephen Lennon and the EDL “proud and prejudiced”, but who can blame him and his supporters for wishing to articulate a deep and well-founded sense of unease arising from certain unwelcome phenomena originating within the Muslim population, that no major political party will acknowledge, let alone address? “Luton in harmony”? Unfortunately not. It could be, but that would demand something that our current authorities are unwilling to do: ditching multiculturalism and rooting out Islamism once and for all. The one reassuring thing to emerge from today’s story is the fact that our security agencies have once again nipped a potential plot in the bud. Overall, they have done a pretty good job in recent years. 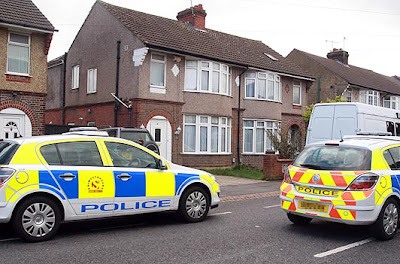