“You have made a great personal contribution to Russian statehood.”

Thus ran the written greeting from Russian President Dmitri Medvedev to Ramzan Kadyrov as he was officially inaugurated into his second five-year term as Chechen President last week reports Izvestiia. These were warm words indeed from Medvedev, but they paled in comparison to Putin’s gushing message which was relayed via Aleksandr Gennad’evich: “I think, considering such services to the Fatherland, that these five years should last for fifty years!” This brought forth a storm of applause from the hall.

In this phrase, one discerns Putin’s attitude towards democracy: it’s useful for providing a rubberstamp for authoritarianism, but otherwise rather troublesome. Kadyrov may be an Islamist, but he’s one of Moscow’s Islamists, so the Russian political elite is willing to let him run his writ in Chechnya providing that he keeps his Islamising tendencies within the boundaries of the autonomous republic. There was an implicit nod towards the importance of Islam in Chechnya by one of the official representatives sent by Moscow – Aleksandr Khloponin – who stated: “We in the Caucasus have a saying: there is nothing more precious than faith.” Given the state of this part of the world, this was a sad but accurate observation, although I am sure that Khloponin did not intend it to be interpreted in such a fashion.

Kadyrov’s address was short, but included the words “We will pay, as we have done formerly, special attention to the development of civil society.” What manner of civil society does Kadyrov have in mind? The behaviour of his law-enforcement agents in targeting women for not wearing headscarves (even if they’re not Muslim) does not fill me with hope that this “special attention” will make the lives of people in Chechnya better than hitherto. It is likely to propel them backwards socially, towards social norms informed and governed by Shariah. Interestingly, Izvestiia reporter Nataliia Alekseeva notes that Kadyrov did not employ the word ‘Russia’ once in his inauguration speech, which should strike one as odd for an individual lauded for having “made a great personal contribution to Russian statehood.” 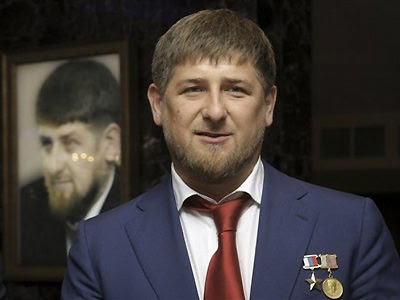