It cannot be denied that it’s been an interesting year politically and economically. Indeed, it’s also been rather revelatory astronomically, given that the Kepler Space Telescope has discovered distant alien worlds of a similar size to Earth, with it only being a matter of time before somewhere is found of the right dimensions and composition orbiting its parent star at the correct distance for life to potentially thrive. Who knows, they may find somewhere even more pleasant than Peckham. I hope so.
Unfortunately, interesting times in politics and economics are rarely comfortable ones, and it could well prove to be the case that 2012 will be as interesting if not more so than 2011. As the year is drawing to a close, the time has come to take my annual festive break and enjoy good company, food and drink: the true meaning of Christmas. The time away from the keyboard will also hopefully remove the threat of developing carpal tunnel syndrome, at least for the time being. Thursday’s Solstice will soon be upon us, swiftly followed by Christmas and the New Year (all good excuses for celebration), so before leaving you with a contemporary (well, when I say “contemporary” I mean 1970s) pagan Christmas carol, perhaps you might appreciate some of the following amongst this year’s articles that you may have missed.
Mediaeval Mummers 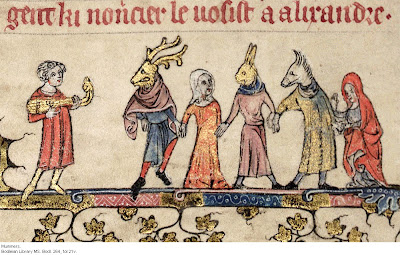 What do you think may have been the topic that attracted the most interest from this blog’s readers in 2011? The August riots? The EDL leadership announcing its support of the British Freedom Party? The Emma West affair? Well, popular as these topics proved to be, it was actually a piece that dwelt upon what is the most perennial pressing concern about which the British obsess (no, it’s neither the economy nor sex). Can you guess what it is? Why, the weather of course! As of today the piece UK Winter Forecast 2011-2012: Blowing Hot and Cold had attracted an astonishing 4,147 page views. Now, regular readers will know that I wouldn’t simply write something about weather forecasting without looking at some of the wider political issues that it raises, so if you should be one of the few who has not cast your eye over it, you may wish to do so (unless you’re not British of course, in which case you may be baffled as to why this may be of any interest whatsoever).
On a more humorous note, some strange creatures have been spotted in northern England over the past year, one of which was captured on camera in Blackburn. The other, sighted in Shepley near Huddersfield, proved to be even more mysterious, and may represent a contemporary manifestation of something that has roots stretching back many hundreds of years.
The ethno-demographic changes in our society are well documented and proceeding at a startling speed, prompting some unexpected well-known voices to comment upon their sense of alienation from what contemporary England, particularly London, has become. Bradford witnessed a particularly unpleasant incident relating to this very phenomenon in September. Events further afield have had and will have consequences for our country, and yet despite the evidence of social and economic tensions caused by the mass immigration of culturally incompatible peoples, our Government and the EU are intent upon more of the same. In the long run therefore, the Arab Spring could well presage a European Winter, insofar as the continent’s peoples could be demographically overwhelmed by those from the predominantly Islamic Euromed countries. Islamisation of course, is not something unique to the member nations of the EU, but alas is also affecting other countries such as Russia, where in September this year parts of central Moscow were brought to a standstill by tens of thousands of Muslims praying in the streets.
Well, I do not wish to end on a negative note, and therefore wish all readers a very Merry Christmas and a Happy New Year, and for those who prefer their midwinter celebrations to possess some rather older pre-Christian roots, I include the following song by Jethro Tull: Ring out Solstice Bells. Blogging will resume in early January 2012.
Posted by Durotrigan at 21:53