The BBC served up a double helping of immigration-related programming this evening: BBC3’s ‘Free Speech Immigration Special’ and BBC1’s Panorama with ‘Britain’s Secret Health Tourists’. Whereas the latter was a documentary, the former was a live studio debate featuring the chirpily naïve Stacey Dooley, UKIP’s Michael Heaver, Labour MP Luciana Berger and Conservative Vice-Chairman Alok Sharma. The initial billing for the panel omitted the three political figures and featured instead Kate Nash, so it was some relief to see that changes had been made to inject at least a little formal political input into the programme, no matter how unsatisfying. Sports journalist Jake Humphrey acted as the programme’s compere.

Reading had been chosen as the location, a town in which it is said that 25% of the inhabitants were born abroad, apparently twice the national average. The debate took place before a studio audience that was said to include “young migrants and locals who feel their employment chances are being affected by immigrants.” How were they selected and who did the selecting? Even before the programme started, the conclusions towards which it was leading were quite clear: mass immigration is a good thing; we cannot survive without mass immigration; opposition to immigration is xenophobic, racist and irrational. Sure enough, these were the officially-endorsed memes much favoured by the BBC which were seamlessly woven into the programme’s narrative.

The audience included a sprinkling of Poles, some Africans and a woman in a hijab. The PC memes of the present that were articulated included: young native Britons are lazy and workshy; Poles and eastern Europeans are hardworking; we welcome immigration providing that people come here to work hard; the NHS would collapse without immigrant labour; immigrants come to plug skills gaps; immigrants make only positive cultural contributions; we are a nation of immigrants, and the oldest chestnut of all: opposition to mass immigration constitutes nothing more than scapegoating during a period of economic crisis. Some of these contain elements of truth, but in general, they are false memes carefully selected and propagated by the mass media and career politicians within the main three political parties. In BBC television debates however, these memes have come together to form a hegemonic multicultural discourse, which is to say that they are accepted as self-evident ‘truths’.

Michael Heaver had a great deal to say, and did make the salient point that if our population continues growing as it does – largely as a consequence of mass immigration – then we will need to build another seven cities as large as Birmingham over the next 20 years, a fact judiciously selected from Migration Watch. He also noted that other than Malta, England is the most densely populated country in Europe. These points were good in and of themselves, but unfortunately Heaver saw it as necessary to launch an attack upon Europeans rather than the EU specifically, saying that our immigration policy should “not be based on nationality” and that immigrants from Africa and Asia should be equally as welcome. Clearly, Heaver is trying excessively hard to avoid the ‘racist’ tag, and it is a shame that neither he nor any other panel member pointed to the fact that there are also negative cultural aspects to immigration, particularly from certain countries and regions.

Luciana said “I completely disagree with what Michael says”, and made the spurious assertion that 3.5 million jobs depend upon us remaining in the EU. Heaver asserted that we had to leave the EU so that we could control our borders, but he argued vigorously for a globalised world and economy – and for immigration from around the world. His stance was therefore somewhat slippery. Luciana was irritated that Heaver kept interrupting her, and claimed that there were “enormous benefits to immigration” which were both “cultural and economic”. She argued for the concreting over of more of our country to accommodate an endless stream of immigrants. At this point, a fault took the programme off air for a time.

Alok too was of the view that immigration should continue, but be restricted to those “adding value”, to “the brightest and the best”. He himself had come to the UK as an 8-year-old. Once again, there was no acknowledgement that there could also be cultural drawbacks to immigration, and his insistence upon seeing people as nothing more than interchangeable economic units revealed the limitations not only of his perspective, but of all who sat on the panel.

Stacey Dooley’s contribution was predictably emotive and imbued with an inherent White masochism, for she attacked the fact that current immigration policy allows for the admission of people from Europe, but not from Bangladesh, India and Africa. When one black member of the audience trotted out the cliché that opposition to mass immigration was a reaction to economic crisis and that immigrants were being scapegoated for unemployment Dooley trilled “I think you’re spot on”, adding “immigrants are vital to this country”.

Strangely, although this programme was advertised as an “immigration special”, half way through it dropped the topic and instead shifted to Nick Clegg, university tuition fees and the attendant spoof video of his “sorry” apology. Overall therefore, the programme possessed no depth, and did little other than allow for the airing of predictable soundbites relating to mass immigration and the message that the BBC tirelessly pushes: mass immigration is a good thing and there are no negative cultural aspects to this process whatsoever. It therefore made for tedious and frustrating viewing, and underscored the reality that UKIP, despite its posturing, is not serious about tackling mass immigration and is instead a single-issue party fixated upon withdrawal from the EU, whilst also possessing a genuine strand of Europhobia rather than mere opposition to the EU as an undemocratic institution. 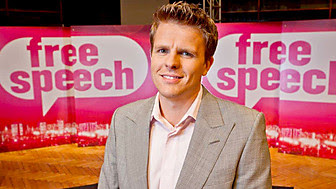