Following recent revelations concerning Muslim grooming gangs in Rotherham and the failure of the local police and social services to tackle this problem for years despite being aware of its existence, a decision has been taken to hold an EDL demo in the town. This is scheduled to take place on Saturday 13 October. Shamefully, the Far Left have thus taken the decision not to highlight the statistically significant overrepresentation of a particular ethno-religious group in perpetrating this type of crime, but to try and blind the public to its reality by calling for a “multi-cultural rally” in Rotherham on the same day. In essence, judging by what has happened historically, this means that some UAF supporters will be seeking to initiate a violent clash with the EDL.

The Rotherham Advertiser quotes Pat Keenan (President of Rotherham Trades Council) at some length, and to his shame he has fallen for the dangerous myths constantly peddled and regurgitated by UAF spokesmen across the country:

“The overwhelming majority of people reject the EDL’s attempt to use racism to divide our society."

“Their attempts to spread racist myths about sexual exploitation must be exposed and challenged. They seek to blame one community for society’s problems."

“The EDL does nothing to protect the victims of sexual violence. Sexual predators and paedophiles exist in all communities, as do their victims.”

He added: “Each time the EDL assemble, minorities and trades unionists are subjected to threats and racial and religious abuse."

“Recently the EDL were prevented from marching through Walthamstow in London due to a fantastic show of unity from the local community.”

“It is essential that we show the same level of unity here. There’s no place for Nazis, racists or their allies in Rotherham’s multiracial, multicultural and multi-faith community.”

If Rotherham locals have any sense, which I am sure many do, they will keep well away from UAF and its deceitful spin about the allegedly anodyne nature of Islam. Advocate of violent confrontation with the EDL Weyman Bennett will be addressing a public meeting at the town’s ‘Unity Centre’ next Monday evening, with the paper claiming that local MP Denis MacShane will also be present. Being aware of MacShane’s politics, it would be nothing short of a miracle if he did not seek to make political capital out of this by appealing to Rotherham’s Muslim voters.


Pat Keenan employs a number of routine lies about the EDL including: calling them Nazis, whereas the EDL have burnt swastika flags and have ethnic minority members and supporters; claiming that the EDL scapegoat “one community for society’s problems”, which they do not, and neither do they claim that paedophilia is uniquely perpetrated by Muslims, but they do correctly highlight the fact that the phenomenon of on-street grooming is a predominantly Pakistani Muslim one. Given that the EDL are routinely and purposefully mislabelled as “racists” and “Nazis” by some trades unionists and UAF ethnic minority supporters, is it any surprise that some EDL demonstrators are tempted to voice their dissatisfaction by yelling abuse at their sworn enemies? The EDL are not, as UAF would have you believe, the current incarnation of Mosley’s Blackshirts, but a grassroots protest group made up of people from disparate backgrounds, although many who turn out for their marches are drawn from football firms.

UAF's effective controlling organisation - The Socialist Workers Party (SWP) - has in a recent article sought to exonerate Muslim grooming gangs from responsibility for the crimes that they have perpetrated in Rotherham, instead laying the blame for the abuse on lack of staff, thereby using the case to call for an increase in public spending in this sphere. This is also, of course, a blatant attempt by this anti-free speech party to solicit support from public sector workers in the town. The article states:

But social workers in Rotherham give a very different account of why the authorities failed to stop the abuse. “I’m not surprised young women fell through the safety net,” one social worker based in the town told Socialist Worker.

“There’s a huge shortage of staff—and particularly of qualified staff. The way the service is run is all about ‘cost management’ rather than getting out there and helping people.”

And it is sexist attitudes towards the victims, rather than imagined “sensitivities” about race, that hold back investigations.

The SWP is part of the problem when it comes to the specific crime of organised Pakistani Muslim paedophilia, because it constantly pushes the line that it does not exist and that to say that it does is 'racist', thereby facilitating ongoing abuse and running the risk of allowing the abusers to go unpunished. It claims to be a party representing the 'workers', but when it comes to ordinary working class English people, it sees them as expendable, preferring instead to court Muslim support.

How much money will be wasted on supporting the UAF counterdemonstration and who will be footing the bill? Doubtless, much of the funding will be drawn from union members’ subs, which is a disgraceful misuse of trades unionists’ funds in the current economic climate, and other monies may be forthcoming from the local council. If you are a Rotherham voter, keep an eye on which of your councillors are backing this protest in favour of hiding the reality of Pakistani Muslim grooming gangs, and be sure not to vote for them at the next election. Too many vulnerable Rotherham girls have suffered already because of this type of crime, and with its reality having been recently exposed, nobody – such as UAF – should seek to hide it from view again. One last question: why is it that the Rotherham Advertiser only allowed UAF and its supporters to give their perspective, whilst denying a platform to the EDL and their supporters? Is this balanced reporting, or propaganda? Why not write to the Rotherham Advertiser demanding that they allow the EDL the opportunity to give their side of the story in its pages?

UPDATE
The Morning Star reports that the anti-EDL meeting that took place at Rotherham's Unity Centre attracted circa 100 attendees on the evening of Monday 7 October. It is their expectation that the EDL will manage to muster between 100 and 200 demonstrators this coming Saturday. As at previous such meetings, EDL supporters were subjected to ritual denunciations as "fascists". Local paper The Sheffield Star also ran a story on the protest on Wednesday 10 October stating that extra police would be coming to Rotherham to police both demonstrations on Saturday, but as with the Rotherham Advertiser, UAF were given the opportunity to state why they were demonstrating, whereas the EDL were refused any voice in the paper, which described them as "far right". South Yorkshire Police estimate that the EDL will draw approximately 200 supporters to the town, whereas they anticipate that about 250 counter-demonstrators will congregate next to the town hall. 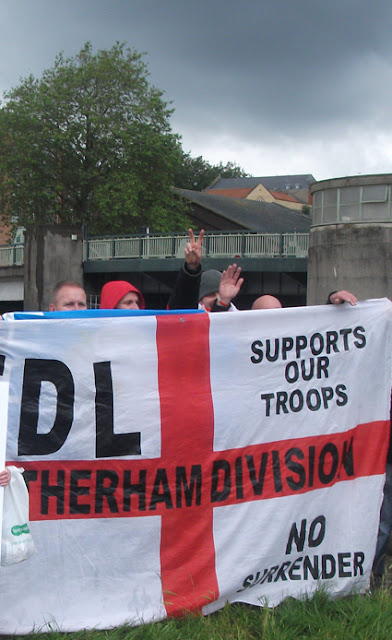