One Million Muslims to march in London?

Since an Egyptian Salafist television station took the decision to screen excerpts from the film ‘Innocence of Muslims’ last month a series of protests has been mounted against the film by doctrinaire Muslims around the globe. Whereas many of the overseas demonstrations have proven to be violent, here in England they have in the main been peaceful, albeit unwelcome and by definition irrational. The film itself would have gone largely unnoticed if it were not for the fact that the Salafist agitators in Egypt deliberately chose to broadcast it with the intent of inflaming the mob element within the Muslim population, fanning its sense of righteous indignation in an effort to win political capital for their cause. Indeed, they have enjoyed considerable success in this respect, and the whole affair brings to mind how in December 2005 Islamist agitators – imams from Denmark touring the Middle East – deliberately chose to publicise cartoons of Muhammed published in the Danish newspaper Jyllands-Posten, as well as appending some additional images themselves for extra measure. Then, as now, they were successful in mobilising Islamist sentiment.

One of the first protests in England against ‘Innocence of Muslims’ took place in the Birmingham Bullring on Friday 21 September and brought around 100 young Muslims onto the streets, some of whom became involved in scuffles with the police. On Friday 28 September it was Bradford’s turn to host a larger protest, although it failed to draw the numbers anticipated. In Oldham however, the Oldham Mosques Council initially took a different view and urged local Muslims to make their opposition known not through the medium of public protest, but via writing to their MPs and MEPs.

More protests were to follow, one of which almost went unreported despite taking place beneath the walls of Westminster Abbey on Saturday 6 October. On the same day, protests took place in West Yorkshire and Lancashire: in Huddersfield the demonstrators gathered in St George’s Square, drawing an estimated 2,000 Muslims (see picture below), whilst across the Pennines in Bolton 300 marched to the local council offices to hand in a petition bearing 5,000 signatures expressing disgust at the film. The following Friday, 12 October, it was Halifax’s turn to host a Muslim protest about the same issue, with hundreds – mostly men – marching through its streets.

This week saw the biggest and most sinister protest yet by Muslims in England, with anywhere in the region of 3,500 to 10,000 people (figures quoted by The Daily Mail and The Daily Telegraph respectively) turning up outside of Google’s London offices demanding that ‘Innocence of Muslims’ be removed from the internet. More such protests are planned for the weeks ahead, with an intended million-Muslim protest to be held in Hyde Park soon. This is not the voice of so-called ‘extremist’ Islam speaking here, but mainstream Islam (but who, other than a Muslim or the wilfully ignorant, could possibly perceive Islamic doctrine to be anything other than ‘extreme’, domineering and intolerant?), for it is said that up to 800 imams in mosques across Britain had backed the anti-Google protest. Trouble is brewing as they attempt to snuff out freedom of speech and expression – in our country – through bullying and intimidation. This is the nature of the ideology that our mainstream politicians have pandered to and facilitated and facilitated the spread of through a combination of political expediency, cowardice and the desire for Arab petrodollars.

It is thus deeply worrying, although not surprising, that plans are afoot for a multi-faith demonstration in Oldham in support of censorship, with Muslims drafting in a handful of Christians, Hindus and Sikhs – useful idiots – to legitimise their attempt to impose a de facto Islamic blasphemy law in our country. Just whose country is this? Why is it that the sensibilities of Muslims are seemingly permitted to trump those of all other and non-faith groups? Why should the ‘offence’ perceived by a Muslim matter more than the ‘offence’ perceived by you or I? What gives an aggrieved Muslim the right to be the arbiter of what we may say, write, think or do? Allah? Allah is a fiction, and a brutish one at that; and as for his ‘messenger’ Muhammed, if he existed, he was a deranged yet politically astute thug, and if he did not, he was a repellent fictional creation that has provided an appalling example to his followers down the centuries. There is no place for Muhammed’s example in this country, this continent, or, indeed, this era, other than as an exemplar of some of the worst traits in humanity; Muhammed bears a far closer resemblance to figures such as Caligula and Genghis Khan than to Confucius, Buddha or Christ. Muhammed's character and deeds were, by definition, offensive.

If the mass Muslim march takes place in London, will it finally awaken our complacent compatriots, far removed from our centres of Islamic population, to the fact that Islamic doctrine is not cuddly, benign and tolerant, the message forever being trumpeted by the BBC, the Conservative, Labour, Liberal Democrat and Green parties? Islam is no friend of freedom; it is one of its foes. These protests therefore must not be pandered to, and it must be made clear to those with familial roots overseas who participate in these demonstrations, that they should reconsider their place of residence. Their presence here is not to the public good. They are generating fear; fear which, sadly, is well founded. 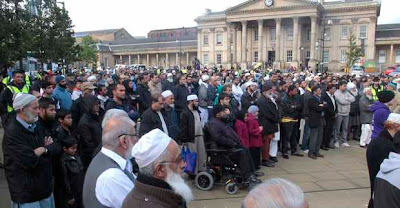 Video of Muslim Anti-Google Protest in London
Posted by Durotrigan at 18:17