Reform Section 5: why is the BBC silent?

The Reform Section 5 Campaign with its slogan ‘Feel free to insult me!’ was formally launched by Rowan Atkinson last week, but for some reason did not appear to receive any coverage from the BBC, or not at least from its website. Why did it choose not to cover this story? After all, since its introduction Section 5 has placed considerable limitations upon freedom of speech and expression and has led to the prosecution of a number of people for no good reason at all. Being a public service broadcaster which, one would think, ought to be interested in championing free expression, why was it silent?

It was therefore left to other media to cover the launch. The Week quoted Atkinson as stating:

Section 5 is part of the Public Order Act 1986, which outlaws the use of words, behaviour or signs that are "threatening, abusive or insulting" near a person likely to be offended by them.

Indeed, the Reform Section 5 website details a number of cases illustrating the absurdity of the law. Three of these case summaries are reproduced below detailing respectively: a man convicted for growling at two Labradors; Christian hoteliers who talked to a guest about Mohammed and Islamic dress codes, and animal rights protesters who were moved on by police because their cuddly toy seals were deemed to be ‘distressing.

Kyle Little was arrested under Section 5 for what was described as a “daft little growl” and a “woof” aimed at two Labrador dogs. Although the dog owner did not want a prosecution, Mr Little was detained for five hours and prosecuted. He was convicted and fined. On appeal Newcastle Crown Court quashed his conviction. The case cost the taxpayer £8,000.

Christian hoteliers Ben and Sharon Vogelenzang were charged with breaching Section 5 for engaging in a conversation with a Muslim guest about Mohammed and Islamic dress for women. After lengthy questioning by police they were charged and later tried at Liverpool magistrates’ court. They were found innocent after a judge said their accuser’s evidence was not reliable. 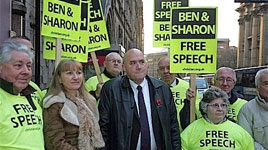 Animal rights protesters were threatened with arrest and seizure of property under Section 5 for objecting to seal culling by displaying toy seals coloured with red food dye. They were told by the police that the toys were deemed distressing by two members of the public. The police then ordered the protesters to move on. 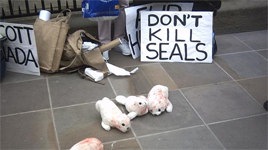 Are we then to take it that the BBC’s silence on Reform Section 5 indicates its opposition to the campaign? This would not, given the tightly controlled and stiflingly politically correct broadcasting of the corporation come as any surprise, for genuine freedom of speech and expression is not something that the BBC favours; it prefers, to borrow an ugly term from the New Labour era, for its presenters and editors to be consistently ‘on-message’, which means not upsetting its pet minority groups such as, most notably, Muslims.

Nonetheless, Reform Section 5 does seem to enjoy a broad spectrum of support, with a number of pressure groups, think tanks and politicians lending their backing to the campaign, as well as a number of celebrities, including Stephen Fry. Organisations as different in their orientation as the Christian Institute and the National Secular Society have united in their wholehearted backing of the project, but despite their vociferousness and willingness to demonstrate over a number of issues relating to freedom of speech and expression (or, more accurately, in favour of their curtailment), no Muslim organisations have declared their backing for the campaign.

The breadth of likely support in the House of Commons is illustrated by an amendment to Section 5 of the Public Order Act tabled by MP Edward Leigh in May 2011, which proposed that the word “insulting” be deleted. Although he managed to garner the support of 65 MPs (31 Conservative, 14 Labour, 11 Liberal Democrat, 6 DUP, 1 Alliance, 1 Green and 1 SDLP), it was not successful. Evidently, a little more pressure needs to be applied to MPs for this campaign to achieve its goals, but there do appear to be grounds for optimism that Section 5 will be dropped, but without of course, any help from the BBC.

The video below shows Rowan Atkinson giving his speech at the parliamentary reception launching the Reform Section 5 Campaign.