Better as Skeletons? The concrete Cows of Milton Keynes

Following the boring and pretentious defacement of a boring and pretentious artwork by Mark Rothko in Tate Modern last week comes a somewhat more imaginative piece of artistic 'vandalism', this time perpetrated in Milton Keynes. Milton Keynes itself (I apologise if you are a resident) is not, it has to be said, the most visually distinctive or appealing of places, and the fact that its concrete cows were one of its most noteworthy features served only to highlight that fact. The cows themselves, as can be seen from the first of the pictures below, were neither the most faithfully rendered nor inspired of creations, and looked rather drab. Following an imaginative piece of 'vandalism' however, they were rather humorously changed into a group of skeletal 'cows', and actually, to my mind, look all the better for it.

Now, although not condoning vandalism, would you support The Parks Trust in its decision to repaint them at a cost of £2,000, or do you think that the sculptures look somewhat better following their inventive transformation? Should they stay as they now are? 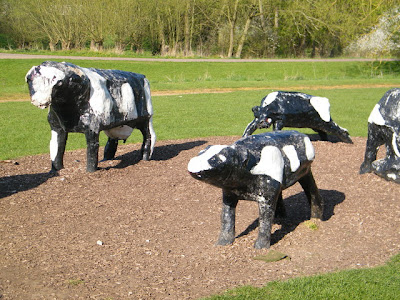 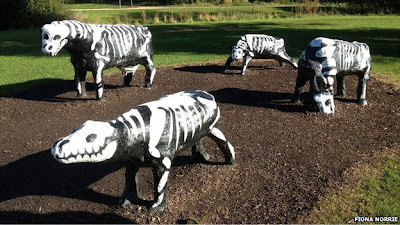