This evening witnessed the broadcast of the first in a three-part series on conspiracy theories with the theme being the 7/7 Bombings; the second and third instalments will deal with Creationism and UFOs. Hosted by comedian Andrew Maxwell (I hadn’t heard of him either), I initially feared, given that is was screened on BBC3, that this offering from the BBC would be from the same stable of “in-depth” documentaries as have previously been hosted by Stacey Dooley, a young woman possessed of all of the gravitas of a helium balloon. Thankfully, this was not to be the case, with Maxwell putting aside his comic persona for the evening and doing a decent job of narrating the piece, questioning each of the conspiracy theorists and attempting to get them to see that “the official narrative”, as they would term it, was actually the correct one.

The four conspiracy theorists came from quite different backgrounds: Layla, a 32-year-old journalist and part-time model; Davina, a 20-year-old Muslim convert and law student; Tony, an ex-security worker and CCTV operative, and Jon, who was described as a “political activist” (i.e. presumably unemployed) from a group calling itself “We are Change”, which from the appearance of its website seems to be some sort of anarchist/Far Left platform akin to Indymedia.

At the start of the documentary, all four believed that the 7/7 bombings were not the responsibility of the men who carried them out: Shehzad Tanweer, Siddique Khan, Hasib Hussain and Germaine Lindsay, but it was the documentary’s express intent to challenge and change these perceptions by presenting them with rebuttals of their pet theories. One of the most interesting aspects of the documentary proved to be how resistant to evidence and logic some of the four proved to be owing to their deeply held and emotionally-charged beliefs, illustrating the lengths to which some people will go to validate a firmly held conviction that is buoyed up by emotional fervour rather than evidence. It seemed, especially for Tony, that to challenge the theory was to in some way question and undermine some aspect of their sense of self.

The four bombers detonated themselves in the bloodiest terrorist act witnessed in Britain (if one excludes the Lockerbie bombing) killing 52 victims and wounding over 700, yet unfortunately the conspiracy theories articulated by the group of four possess a certain resonance with a segment of the population, for an opinion poll carried out by Channel 4 News in 2007 revealed that 24% of its sample of 500 “British Muslims” believed that the 7/7 attacks were planned and implemented by the Establishment.

Maxwell spent a week with the conspiracy theorists, starting out in Leeds where they were introduced to a resident of Beeston named Sasha, who had lived opposite Shehzad Tanweer and knew two of the other bombers. Davina’s belief in a conspiracy theory rested upon her conviction that the personalities of the “Muslim boys” simply did not fit with the atrocity that they had committed. She posed the question as to whether they had been “forced to do it”. Sasha herself noted that a great deal of suspicion had grown up between Muslim and non-Muslim residents since 2005, but stated her belief that the bombers had been “innocent” and that the Hamara Centre – which is where the bombers had spent a great deal of time together – had nothing to do with terrorism as “they were good Muslim boys” who didn’t go to London to kill people. This delusional thinking was demolished by a Muslim academic named Dr Russell Razaq, who specialises in terrorist psychology. He noted how the three bombers sequestered themselves in the Hamara Centre until two or three in the morning, long after it had closed, with nobody else present. Talking long into the night, the three reinforced and radicalised each other’s worldview, free from the observation of others. Davina appeared impressed by this reasoning, and conceded that the apparent discrepancy between their characters and their actions could be accounted for in this way.

The group then took a minibus to Luton, where the three bombers who had set off from Leeds met up with Germaine Lindsay in a Luton car park. This is where one of Jon’s pet theories – that the train times had been “falsified by the Government” because the 07:40 from Luton had been cancelled – was challenged. All four were given the task of pretending to be one of the terrorists, and of making their way from Luton Station to the various points in London where each had detonated their devices. Contrary to their expectations, they made it to the designated locations at just the time that the bombers had – with three of the bombers simultaneously detonating their devices at 08:50 – thereby disproving Jon’s assertion that this had not been possible. Nonetheless, Jon remained convinced that elements in the Government had deliberately planned an operation to murder citizens to legitimise its ongoing war in Iraq and to secure access to oil. Even by the end of the documentary, having been confronted with much more evidence disproving his theory, he held dear to his paranoid leftist delusion that the 7/7 bombings had been planned as “a justification to continue those wars in the Middle East” and to support the spread of “British imperialism” around the world. Tony too was of a very similar mindset, thinking that “big business” also had something to do with it.

Tony had been convinced that there was something fishy about some CCTV footage having gone what he termed “deliberately missing”, with Jon concurring that 20 minutes of missing footage from the Tube “reeks of an inside job”. Brian Paddick, Deputy Assistant Commissioner of the Met on the day was unable to convince the duo otherwise.

The four were introduced to a survivor of the Edgeware Road Tube explosion – Jacqui Putnam – who had seen Siddique Khan reach down and detonate his bomb, yet this convinced neither Jon nor Tony. Davina however, dabbed away a few tears, and at this point came to recognise that the four had committed this crime. Jon and Tony were now taking the line that the four had been “patsies” to cover for a “parallel operation” by the security services.

An Imam – Dr Naseem – was visited, who made the ludicrous claim that the Government had planned the suicide bombings to incite hatred against Muslims, a view with which Jon and Tony enthusiastically concurred.

Layla stated that she had some doubts over who had detonated the bombs, for she had heard that they were already in the trains and had been detonated remotely from beneath. However, an explosives expert explained that none of the trains had derailed, which would have occurred had bombs been planted beneath the carriages. This was the moment when the penny dropped for Layla, who promptly discarded her previous belief in the bombings having arisen from a conspiracy theory, the nature of which she had not elaborated to any great extent. A bitter row then later ensued between Layla and Tony and Jon, with Layla stating that neither of the two men believed in logic. This caused particular offence to Tony, whose argumentativeness appeared to grow out of his innate truculence.

It was Tony who also scoffed at the idea that homemade explosives could be powerful enough to cause the blasts, a belief blown apart like the bus in a quarry demonstrating the power of an improvised device using black pepper and hydrogen peroxide.

In pithy fashion, Maxwell turned to Tony and Jon and said: “Can you not have some more fucking doubt in these online idiots?!” A fair point. By now, Tony conceded that Maxwell had made him realise that “it was a cock-up rather than a conspiracy”. Not Jon though. Jon continued to stick to his conspiracy theory. Whether or not he also believes that the world is controlled by a global elite of lizards was not made clear, but it would come as no surprise to learn that he subscribes to such lunacy.

Although this documentary appears to have caused something of a furore in the press, it was a decent programme that sought to undermine some frankly outlandish conspiracy theories held by a worrying minority of people about the atrocity on 7 July 2005. The words of a father about his 22-year-old son David, who died that day on his first solo trip to London as he stood next to Siddique Khan, summed up the loss that many experienced, and will never be able to replace owing to the actions of a small group of violent Islamists: “I’ll never ever stop feeling angry about the death of my son”.

There are others like them in our towns and cities today, and it is to the credit of the security services that so many would-be bombers have been intercepted before being able to carry out their plots. Islamism is what caused these deaths, and it is Islamism that must be rooted out to ensure that this never happens again. Many so-called 'truthers' are apologists for and enablers of Islamism, and their ravings deserve no credence, just as Islamism deserves no place in our country. Who do they think made Shehzad Tanweer's 'martyrdom' video? MI5? Their position is delusional and risible. 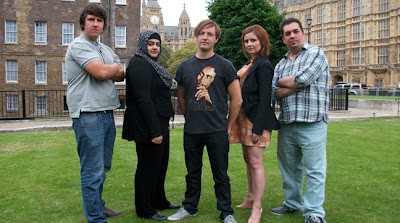