It has been announced that elements of the anti-free speech Far Left will be holding a fringe meeting at the Labour Party Conference in Manchester on Tuesday evening. Gathering beneath what it terms “the antifascist flag”, UAF will be bringing together a range of individuals who will be discussing how to make political capital out of manufacturing a phantasmogorical “fascist” threat in Luton specifically, England more widely, and Europe generally. To date, they have been highly successful in raising funds from innocent trades unionists through invoking the spectre of a non-existent recrudescent fascism, and in order to legitimise their ongoing existence and continued funding it is necessary for this bogey to be kept alive in the public's, or at least the Labour Party’s, imagination.

Kelvin Hopkins, MP for Luton North, will be making the most brazen bid for Muslim votes by inveighing against the evils of “the racists and fascists of the English Defence League in his Luton constituency”, whilst other veterans of the cause will include the previously convicted Weyman Bennett, as well as a number of current and former Labour MEPs. Although there are certainly minority elements within the EDL that have caused violence at some of their demonstrations, violence and threat are inherent within UAF’s modus operandi, as most recently demonstrated by the decision to cancel a debate between Stephen Lennon of the EDL and representatives of the Muslim Debate Initiative at London’s Conway Hall that was scheduled for 4 October. In a post on their blog, the Muslim Debate Initiative (MDI) made it clear that it had been cancelled not because of any perception of potential violence from the EDL or from Muslim objectors, but because of the threat from so-called “anti-fascists”. The MDI blog reports the decision relating to the cancellation as follows:

Conway Hall, has decided based upon advice from the Police, and under pressure from various anti-fascist organisations and at least one MP, that the event may put the public at risk to public health and safety concerns under the current climate. Despite the security procedures of MDI within the building, the Venue Director was concerned about the safety of attendees outside the hall when going to, and leaving the event. Therefore, Conway Hall has informed Muslim Debate Initiative that for the time being, they will have to cancel the hire of the hall to MDI for this public event.

The MP concerned was Frank Dobson. Contrary to the assertions of UAF and its ideological confederates, it is not some phantom “Far Right” that we should fear with respect to our liberties, but the very real and influential Far Left of which it is a part. Reading the jubilant piece relating to the forcing of the cancellation of this debate on the UAF website, one is met with the following startling passage:

We believe the EDL is a fascist organisation. Fascism stands for: the total annihilation and mass murder of its opponents including trade unionists, liberals, social democrats, socialists, communists, Jewish, Muslim, black, Asian, lesbian, gay communities and other large sections of humanity. It also stands for war, the destruction of all democracy and freedom. History shows this is what happens when fascism gains power.

Is this what the supporters of UAF truly believe? Does the quote above strike you as having been penned by someone with a rational perspective fully apprised of the facts, or by someone suffering from a paranoid set of delusions? The question is superfluous. UAF is a dangerous anti-democratic campaign group that employs PC anti-racism slogans to mask its SWP-driven agenda. Any decent delegates at the Labour Party Conference this week would be wise to give this thuggish fringe a wide berth, and thereby avoid complicity in manufacturing unnecessary social conflict. 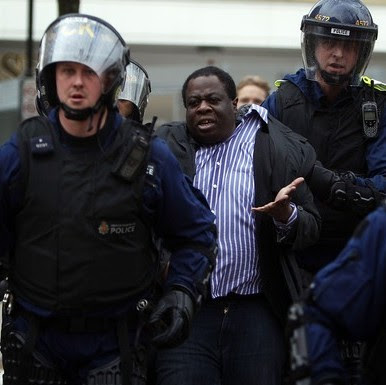