The EDL has held a demonstration in Walsall today. It cited the following reasons for holding the protest in this West Midlands town:


We are going to Walsall,‭ ‬not to protest about Muslims or even Muslim violence,‭ ‬but to protest about Islam,‭ ‬an ideology that denigrates non-Muslims and places them lower than animals and sees non-Muslim women as targets for grooming and sexual exploitation.‭ ‬We are going to Walsall because the West Indian community is suffering even more attacks‭ ‬every day‭ ‬on their community than the white community of the town.‭ ‬The very same people who stood shoulder-to-shoulder with the Pakistani/Muslim community to fight down the far-right National Front and their racist attacks.‭

We are going to Walsall to show our support for the West Indian community,‭ ‬to protest the vile ideology of Islam that is splitting communities and breaking down social cohesion.‭ ‬Other ethnic communities,‭ ‬black,‭ ‬white,‭ ‬Afro-Caribbean,‭ ‬European all seem to get along together and have been doing so for many years.‭

Admittedly, this is only an excerpt, and there is far more on the EDL website here.

According to the Birmingham Mail, there have been confrontations between the police and demonstrators in Walsall today, but as is normal in the reporting of EDL demos, the identity of those clashing with the police is not made clear, for the report mentions "two rival groups" that the police were attempting to keep apart. Central News confirmed the customary presence of a counterdemonstration - this time held under the banner of 'We Are Walsall' (WAW) - which is in effect a front group for the SWP-dominated UAF. Many well-meaning individuals may well have been caught out by this strategy and lured into joining the counterdemonstration without being aware of the background agenda of the SWP. The local Labour Party also threw its backing behind the WAW initiative, with the police allotting them a spot to demonstrate some half a mile from the location of the EDL static protest. Whether or not WAW has attracted violent 'antifa' and anarchist elements as in Bristol this summer has not been confirmed, although one tweet by someone calling themselves ST3-walsall claimed that four Muslims got through the police lines and set off fireworks.

Information on numbers attending either of the demonstrations is currently lacking, but the police confirmed that a total of 28 arrests were made, some for throwing missiles which included bricks, bottles and planks. The affiliation of those arrested has not been divulged. The short video posted at the end of this piece appears to have been taken by an observer on his phone, with the EDL hoving into view in the ninth second. It is of rather poor quality, and does not allow for an estimate of the numbers to be made. However, a BBC report states that the EDL managed to draw about 1,000 supporters and the opposing demonstration circa 500. In the last couple of demonstrations held in Walthamstow and Bristol, the EDL contingent had only numbered in the low hundreds and had been significantly outnumbered by their opponents, so this turnout provides something of a fillip for the protest group. Unusually, the BBC refrained from dubbing the EDL "far-right" in its online report. 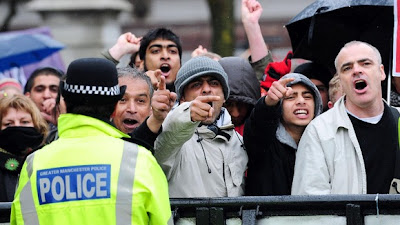