BBC's Look North reports that this evening some 2,000 demonstrators have gathered in Bradford's Centenary Square to protest against US drone strikes in Pakistan. Speeches have been given by, amongst others, George Galloway, Muslim convert Yvonne Ridley, and a representative of CND. The Telegraph and Argus states that the organisers justified the demonstration on the grounds that British intelligence had assisted in the planning of the drone attacks; they anticipated a turnout in the region of 5,000. Imran Khan also sent a video message to the protesters.

Galloway will presumably be hoping that his appearance this evening will divert attention away from his recent comments relating to what he termed "bad sexual etiquette" and "window lickers". Amongst the general public these have done his somewhat dubious image no favours whatsoever, but will they bother many of his "devout" male constituents? The latter, at a guess, will probably be more concerned with whatever he said tonight about a country far away that has no links with native Bradfordians. At least we can be thankful that thus far this evening, they have not resorted to the violence displayed by their co-religionists in Egypt, Libya, Yemen, Sudan, Lebanon and Tunisia using the pretext of an American film about the life of Mohammed. I have seen some bad films in my time, but the experience has never moved me to attempt to storm embassies and murder ambassadors; a few shakes of the head and critical exclamations have sufficed.

UPDATE: The following morning, the estimated number of protesters was stated as being "hundreds" by The Telegraph and Argus rather than the 2,000 reported by the BBC. On Friday 28 September, Centenary Square will host a protest against the film 'Innocence of Muslims'.


Imran Khan addresses the Pakistani masses from his Bradford telescreen 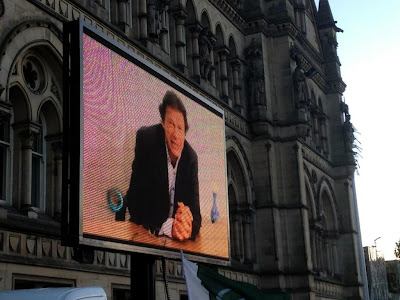 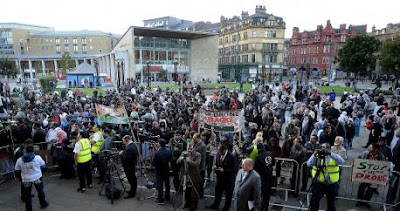