The recent appointment of ‘Baroness’ Sayeeda Warsi to the post of Minister for Faith and Communities served as a reminder of one of the significant flaws in the current democratic system in the UK: an unelected and unaccountable House of Lords. The fact that Warsi is a member of the second chamber has enabled Cameron to bestow upon her ministerial responsibilities, and for Warsi to make policy without any democratic mandate. This represents the very worst sort of tokenism and ‘positive’ discrimination, yet it is not this in itself that prompts the writing of this piece today, but rather what Warsi has signed with the Organisation of Islamic Cooperation (OIC).

The National Secular Society notes that Warsi has this week signed a Memorandum of Understanding (MOU) between the UK and the OIC at the UN, which declares that the two will “work together on issues of peace, stability and religious freedom.” Those of you who are aware of the activities of the OIC, will know that this body of 57 Muslim states is attempting to introduce a global blasphemy law which would make it illegal to criticise or to satirise Islam in any country. Knowing of the penalties imposed by Islam for blasphemy, this is a chilling and deeply worrying prospect, as is the fact that this seemingly is not a matter of concern for Warsi. Moreover, as well as being Minister for Faith and Communities, Warsi has also been given an influential role as Senior Minister of State at the Foreign and Commonwealth Office that makes her "the lead minister responsible for Pakistan, Afghanistan, Bangladesh, Central Asia, the UN, the International Criminal Court and the OIC". Given her domestic and foreign affairs briefs, she could perhaps be more appropriately dubbed the Minister for Internal and External Muslim Affairs, for this is, in effect, what she is.

We are all for co-operation between nations to try to foster peace and understanding, but the concept of 'religious freedom' is one that the OIC has distorted to mean restrictions on free expression.

Sanderson also noted how blasphemy laws were being used in some OIC states to “suppress Christianity and other religions in a brutal and merciless fashion” and singled out Pakistan for particular criticism on this score, whilst noting that in Egypt accusations of blasphemy were being employed to destroy political opponents.

As Warsi is a Pakistani Muslim who has made clear her distaste for secularism, should we not possess legitimate concerns about her warm embrace of the OIC? That she possesses political office of any sort is not only an indication that our democracy is in need of democratisation, but that if it is not reformed our basic freedoms and liberties could be imperilled through the actions of appointees such as Warsi who hold values clearly at variance with those that we have long held dear.

Sayeeda Warsi: in favour of a global blasphemy law? 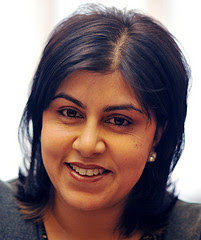