What was the motive underpinning today’s shooting and grenade attack on shoppers in the Belgian city of Liège? Some reports state that it was the action of a lone gunman - as Nordine Amrani – who is said to have killed himself after throwing grenades into Saint-Lambert Square, where one eyewitness claimed that some four explosions wrought their bloody work amongst Christmas shoppers. He is also reported as having opened fired at the crowd from the rooftop on which he was situated. His firearms of choice: the FN FAL automatic rifle and a pistol.
According to the BBC, Amrani had previously been sentenced for firearms and drugs offences, and had recently been asked to report to the police in connection with fresh charges. The Daily Mail adds that the 33-year-old (some reports say 32) was also a convicted sex offender. As in the immediate aftermath of all such incidents, it is not yet clear how many casualties there have been, with the BBC claiming three dead and 75 injured, the Daily Mail four. At 6.45pm the Daily Telegraph announced that the number of fatalities had risen to five following the death of an 18-month-old girl. Within a couple of hours, the Guardian noted that the death toll stood at six. More than 120 people were injured and the day after the attack it was announced that Amrani had also murdered a 45-year-old woman who happened to be a cleaner for a neighbour. Her body was left in his shed which he had used to cultivate cannabis.

Was this act of carnage in which the killer blew himself up with a grenade simply the act of a man who had experienced a violent mental breakdown, or something else? The Belgian police claim that evidence indicates that this was not an act of terrorism. In some respects, the seeming meaninglessness of this random violence resembled last weekend's shooting spree in LA, where a lone gunman yelled "Allahu Akbar!" as he took aim at passing motorists until shot dead by the police.

In a bizarre and bloody incident in Florence today, Gianluca Casseri opened fire at a group of Senegalese street traders, killing two and wounding a number of others before driving away to shoot himself. From reports it is difficult to ascertain the timing of this crime. Might it have been 'inspired' by the atrocity in Liège?

Somehow, the name ‘Nordine Amrani’ does not suggest someone of Belgian provenance. A Moroccan-Dutch Thai kickboxer (a peculiar cultural melange if there ever was one) by the name of Mosab Amrani suggests that Nordine Amrani could have been of North African origin. A search for this surname using Wikipedia reveals a range of Maghrebian individuals. Can an Islamist motivation therefore be ruled out? According to blogger Klein Verzet, the attack could be linked to violent threats made on 13 December to a Belgian court which handed down sentences linked to a Muslim honour killing. Four members of a Pakistani Muslim family - a father and his sons - were gaoled for killing daughter Sadia Sheikh in 2007. The videos below illustrate the state of confusion in the city this afternoon.UPDATE HERE.
Belgian Medics come to the Aid of Victims (courtesy of Daily Mail) 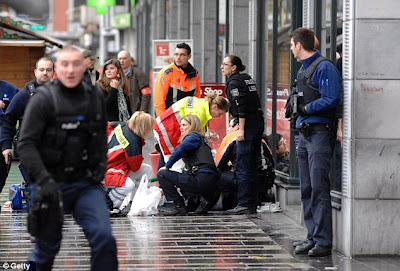