The absurdity of the following picture from the UAF website cannot but fail to raise a smile. I'm sure that the creature in this mobile tent really possesses oceans of tolerance for 'diversity', other viewpoints and alternative sexual orientations. The irony of this UAF Grim Reaper/ninja hybrid Islamo-fascist (scythe traded in for a placard today sporting a slogan denouncing 'fascism') protesting against 'intolerance' at today's counterdemonstration against the EDL in Blackburn is priceless. If this picture had been taken yesterday, I would have written it off as an April Fool's joke, but it was taken today! Did our forefathers fight World Wars I and II to enable hostile colonising ingrates such as this object to take our country from us? Of course they didn't! They must be turning in their graves. Further unintentional amusement can be derived from a UAF video here. 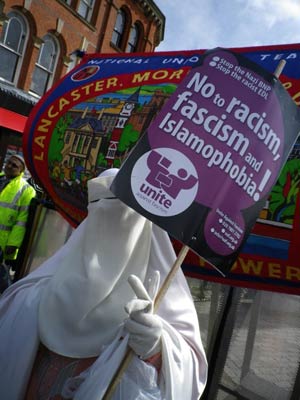 And now ladies and gentlemen, for you enjoyment and delectation, I present Afghanistan's hottest female act - the Burka Band - singing their biggest hit 'Burka Blue'!