According to Izvestiia, an explosion has occurred at the Minsk Metro station of Oktiabr'skaia. It took place during the rush hour and is reported has having caused seven fatalities. A further 35 people have been injured. President Lukashenko has called the emergency services into action to deal with the situation, but who or what was behind the blast has yet to be declared or ascertained. Belarus has not hitherto experienced Islamist extremism, but it is unclear what possible motive any other group could have for targeting Belarussian commuters. This blast comes a little over a year after the March suicide bombings on the Moscow Metro carried out by Chechen 'black widows'. Belarus of course has no Muslim population to speak of, but Lukashenko has very close and warm ties with Russia, and as such, may have incurred the ire of Islamists from the Caucasus.

A later report in Nezavisimaia gazeta claims that there were possibly two explosions, and that 50 people are now thought to have been wounded. Novaia gazeta states that the explosion(s) occurred at 18:00 local time. This is the first such act of terrorism to hit the Minsk Metro, although a bomb detonated at an independence day celebration on the night of 3rd - 4th July 2008 which injured 46 people. Police at the time were looking for a dark-complexioned man, but nobody was apprehended for the crime and no motive has ever been established. By 23:18 Moscow time the number of casualties had been upwardly revised to 11 dead and around 100 wounded. Lukashenko was also reported as speculating that there could be a link between today's explosion and that of 3 July 2008, and as having set up an investigative group to examine the evidence for such a connection.

Life News Russia cites a revised figure of 80 people wounded. Video footage from the scene of the explosion is displayed below:

Return here for updates as they become available. 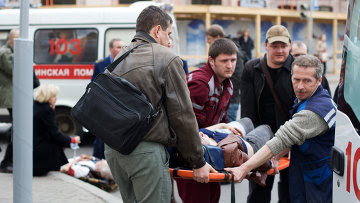