Discounts for Muslims cause Disquiet in Tatarstan

“Special price. Special price for you my friend.” Have you ever heard these words before? I have, and the man uttering them never bothered sending me a quote for building work (I think that he was alarmed by some of the titles on my bookshelf) which is just as well, for behind the innocent English-sounding name of his company, it turned out to be an all-Muslim operation so they wouldn’t have got a penny out of me anyway. Well, in Kazan, the capital of the Russian republic of Tatarstan, it would appear that the offer of a “special price. Special price for you my friend” is being made good. Providing that is, you are a Muslim.

The recent appearance of an advertisement offering discounts on goods and services to Muslims only has caused some disquiet in the city. This scandalous de facto cash incentive for people to proclaim themselves Muslims was brought to light by a correspondent for Rossiia Regnum, who discovered this phenomenon in Kazan’s ‘Halal Guide’, which is a directory aimed at promoting Muslim businesses in the city. The advertisement for discounts for Muslim customers had been placed in the guide by the Falida Muslim Centre (see picture below), and included discounts for dental treatment and motorists. 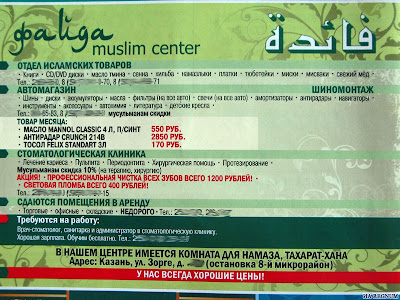 The reporter followed this up by calling the dental clinic in question, but representatives of the management refused to discuss the discounts. Such a discount, according to another professional dentist named Vasilii Ivanov, suggests that the dentist in question had broken the Russian equivalent of the Hippocratic oath:


“Such a distinction between patients is absolutely unacceptable for a doctor. In my opinion, this is in no way better than the situation would be if the cost of services was differentiated in accordance with a person’s skin colour. All doctors in our country take the Doctor’s Oath of the Russian Federation, in the text of which are these words: “Be always ready to offer medical assistance to the sick . . ., to act exclusively in their interests irrespective of sex, race, ethnicity, language, origins, wealth and social position, place of residence, relationship to religion, convictions, membership of social organisations and such other circumstances.””

Quite clearly therefore, favouring Muslims over other patients is in violation of this ethical code.

Yana Amelina, an academic specialist based at the Kazan Centre for Regional and Ethno-religious Research states that such discounts are also in direct contravention of the Russian Federation’s secular Constitution, and that dividing people upon the basis of confessional belonging is likely to exacerbate tensions between Muslims and others.

So, why are such discounts being offered? Evidently, it is seen as making good business sense, although in the case of one particular dental practice this effort to lure Muslim customers through the door may have backfired somewhat. Islam is ‘reviving’ in Tatarstan, and a significant strand, as previously documented here, is militant and violent. Offering discounts to Muslims appears to be a mechanism via which perhaps people with only a lax Muslim heritage can be made to more actively self-identify as Muslims, which accounts for the willingness of the Falida Muslim Centre to host such an advertisement. Thus opens up another front for Dawah in Tatarstan. If you're a kafir like me, make sure that you don't get toothache when visiting Kazan.