The EDL will be holding a full demo in Blackpool on 14 May to demand that the Charlene Downes case be reopened. This has been prompted by revelations this week connected to the paedophile grooming of 60 English girls by ‘non-white’ males (generally a euphemism for Muslims in such contexts, but we shall have to wait and see whether this is the case) working in eleven Blackpool takeaways, and to the £250,000 of taxpayers’ money paid in compensation to the alleged killers of Charlene Downes.

Casuals United have already held three demos demanding justice for the family of Charlene Downes, and yesterday held a flash mob demo outside of the Mr Beanz takeaway, the shop owned by those formerly arrested for the suspected murder of the Blackpool girl. The Casuals United blog reports:


Sixty Casuals and locals held a flash demo outside Mr Beanz takeaway in Blackpool today demanding justice for the family of Charlene Downes.

The paedophiles inside the shop laughed and even disrupted the minutes silence that was held in Charlene’s memory. They are so sure they have gotten away with it, and all the other children they regularly groom and abuse without fear of arrest. Scum. Justice is gonna catch up with you, one way or another, that is guaranteed.

This latest protest has attracted next to no media attention, just a short report in the online Blackpool Gazette which promises to provide something more substantial (and probably more damning) on Monday. However, at least this brief report can be commended for its neutral matter-of-fact tone, an extract of which is reproduced below:


The protest started with a minute-long silence and then lasted for an hour.

A spokeswoman for Lancashire Constabulary said: “No arrests were made during the protest as it passed without incident.

“A small number of protesters stayed in the area and we increased the police presence in the town centre accordingly.”

The Casuals can only be commended for their persistence in keeping the Charlene Downes case in the public eye. As for the forthcoming EDL demo, which is anticipated will be a far larger-scale affair than any that have hitherto taken place, the organisers have wisely issued a set of demands outlining the reasons it is being held and inviting the police to address them. As the EDL leadership make clear, they have no interest in overstretching the resources of Lancashire Constabulary and placing an additional burden upon the pockets of local residents. The perfectly reasonable set of demands are listed on the Casuals United blog as follows:


The EDL demands that immediate action is taken by our government and police forces and requests the following:

The CPS immediately re-open the investigation into the disappearance of Charlene Downes.
The police publicise the 11 “honeypots” in question, revoke their trading licenses and close them down.

The government agree to open an investigation into pedophile grooming gangs throughout the UK.

Should these requests fail to be adhered to the English Defence league will be holding a demonstration in Blackpool on 14th May 2011, and will return regularly until our wishes are met.

We realise that we are stretching the budget of Lancashire Constabulary by announcing a demonstration in their region again. But if you have quarter of a million to give out to murderers then you can afford to police our right to protest against this gross miscarriage of justice. The ball is now in your court. Do what the great British people expect of you and uphold the law without being scared of being called racists. Show us proof that this is being done and we will cancel the demonstration.

Let’s hope that the police act upon this list of demands and implement them ahead of 14 May. Otherwise, good luck to the EDL and the Casuals in running an effective, popular and peaceful demo in Blackpool next month. 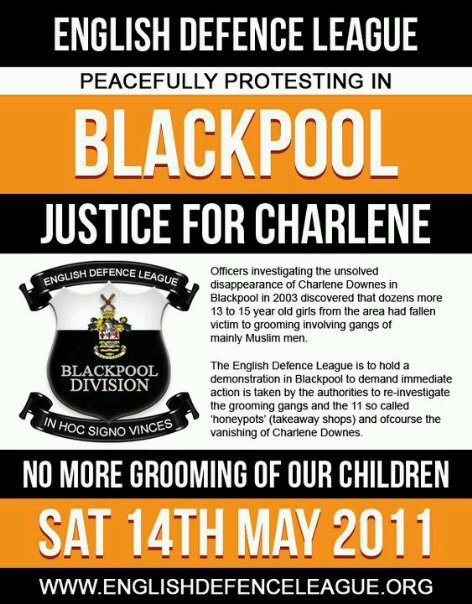