Middlesbrough is but one of three seats in which parliamentary by-elections are being contested today, the other two being Rotherham and Croydon North, each of them possessing what would seem to be an unassailable Labour majority. Only in Rotherham is anything other than a straightforward Labour triumph anticipated, but even though UKIP are expected to poll very well there, quite possibly displaying their best Westminster result to date, it would be astonishing if they were to seize the seat from Labour. However, Bradford West earlier this year demonstrated that the unexpected could happen.

The Middlesbrough by-election was precipitated by the death of the Labour incumbent Sir Stuart Bell, and one former Labour Party member who would have liked to have stood on the party ticket but was unable to do so was Bradford-based Imdad Hussain who was suspended from the Labour Party in September for his failure to disclose having been banned as a company director. Nonetheless, the latter has decided to run in the by-election under a different flag – that of ‘The Peace Party’! Given his lack of local roots and the fact that he was dismissed from the Labour Party, his prospects do not look healthy.

The Labour candidate this time around is Andy McDonald, who can look forward to the unthinking support of Labour tribalists who’d vote for a mollusc if a Labour rosette could be successfully attached to its body, although it is likely that his primary foe will be voter apathy, as was displayed in the remarkably low turnouts at the most recent crop of by-elections earlier this month. This could, to a certain extent, give a fillip to some of the candidates from the smaller parties, but whereas UKIP is enjoying some of its best ratings in national opinion polls since the height of the parliamentary expenses scandal, it is not likely to do nearly as well as in Rotherham.

In 2010 Labour managed to grab 45.9% of the vote with the Liberal Democrats trailing in second place on a distant 19.9% and the Tories third with 18.8%. If recent trends are repeated here, we should expect to see a significant slump in the Liberal Democrat share of the vote, possibly in the region of 5-10%. As this is not natural Conservative territory and the Government is not currently overly popular, it is likely that the Tory share will also shrink, but probably hold up better than that of their coalition partners.

UKIP managed to take only 3.7% at the last General Election, coming last in sixth place behind the BNP who took 5.8%. However, since than UKIP’s fortunes have waxed to a certain extent, and the BNP has entered a death spiral, haemorrhaging the bulk of its national membership and most of its experienced senior personnel. Taking into account the remaining candidates – an Independent named Mark Heslehurst and John Malcolm running under the banner of Trade Unionist and Socialist – UKIP ought to expect to secure a better performance and position this time around, with it being a near certainty that the party will leapfrog the BNP. However, other than the electors of Middlesborough will many people other than political pundits be paying much attention when the result is announced? All eyes it seems will be turned to Rotherham. 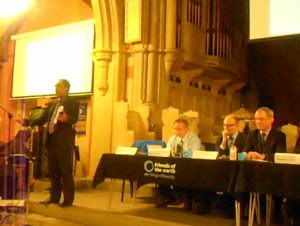