Somalia: an Antidote to Somali Alienation

So seemed to suggest a Channel 4 report this evening, and with such a conclusion, I do not beg to differ. According to the Office for National Statistics, there were some 108,000 immigrants born in Somalia resident in the UK in the 2011. This figure of course excludes second or third generation Somalis, so the actual and much higher total of Somalis resident here is not publicly available.

The arrival of such a large volume of Somalis has led to the emergence of identifiable and notable Somali clusters in cities such as London, Sheffield, Bristol and Leicester amongst others, and together with the UK’s officially promoted ideology of multiculturalism, this weight of numbers has allowed Somalis to maintain their insular identity, whilst at the same time creating a sense of cleft identity amongst many Somalis born in the United Kingdom who are cut off from the direct experience of their ancestral motherland. The latter do not in many respects therefore feel traditionally Somali, yet often simultaneously bear an antipathy towards British and more widely Western culture; culturally ambiguous and uncertain, many British-born Somalis thus find themselves in a deracinated anomic state in which criminality can flourish.

To a significant extent, the fault for this situation lies squarely with Whitehall policymakers and their prescriptions for what they see as the utopian ideal of a ‘new’ Britain, in which anyone and everyone from around the world may be perceived to be, and as accepted as being, as British as anyone whose ancestors have been present here since time immemorial. This naïve vision has resulted in the overgenerous granting of citizenship and the promotion of social Balkanisation championed by the ideology of ‘diversity’, legitimised through reference to a policy tool labelled ‘anti-racism’ which rests to a significant extent upon the fatally flawed and anti-rational Macpherson Report. The unwillingness of the British state and its agencies to either acknowledge what should be the transient status of Somali residents, or to compel them to adopt the most fundamental of our basic practices such as speaking English and not practising genital mutilation upon their daughters, has of course allowed Somalis to feel sufficiently comfortable to stay, whilst not identifying with the host society and culture. Thus do we witness remarkable levels of Somali unemployment – 31.4% for Somali men and 84.2% for Somali women in the three months to June 2008 – and a notable statistical overrepresentation of young Somali males in criminality.

Returning to this evening’s Channel 4 News report, it focused upon a small group of young Somalis who had left England to reconnect with their roots in line with their parents’ wishes, with the latter concerned either that their children were becoming excessively westernised or were at risk of falling into lives of crime. The report followed them to Somaliland, the most peaceful region of Somalia, its relative prosperity standing in stark contrast to the war-blasted images of the country’s capital Mogadishu. Here, the return of hundreds of such Somalis to their ancestral homeland has become increasingly familiar, with the locals even coining a term for such returnees: dhaqan selis (“the rehabilitation community”). This term, unsurprisingly, possesses a somewhat pejorative air, but the returnees have found that they feel more at ease in Somalia than in Britain, although the lack of traditional goat herding skills, admittedly difficult to acquire in Sheffield, London or Bristol, served as cause for embarrassment for the young Somali men featured in the report. Nonetheless, these young men were quite happy to remain in Somalia, whereas a young Somali woman named Laila found the restrictions upon Somali women somewhat oppressive and wished to return to England.

Now that peace has returned to at least one area of Somalia, it would seem to make sense for those Somalis who do not fully embrace our way of life to return to their homeland where they naturally feel at ease. This is a positive step for all concerned, and offers a solution to the sense of estrangement from and hostility towards British culture and society experienced by many Somali residents. Somaliland offers them a chance of return, where they can reconnect with their ancestral culture and people, removing the sense of alienation and social awkwardness that characterises their lives here. If some, such as Laila, might see some worth in our society, and particularly in our attitudes towards women, then perhaps such a return could have a very beneficial impact upon Somalia, one day perhaps leading to the cruel practice of female genital mutilation being forever banished from that country. 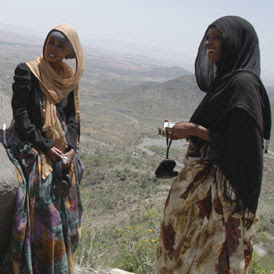