A gunman reported to have taken four hostages in a Toulouse bank today is claiming to be a member of al-qaeda, whereas the local authorities claim that he is suffering from "schizophrenia." The Daily Telegraph reports that three gunshots have been heard, but thankfully there has been no news of injuries or fatalities.

The gunman himself - "Boumaza" - claims that he has taken the hostages for "religious" rather than financial reasons, so it can only be hoped that French police manage to bring this situation to a swift and safe conclusion, given the favoured Islamic method of executing hostages. One hostage was released earlier this afternoon.  At the time of writing, Boumaza is not reported to have made any specific demands, which perhaps lends credence to the official line that he is suffering from schizophrenia. His sister, who is helping police with negotiations, says that her brother reacted very negatively to being taken into social care as a child, becoming angry with and fearful of the outside world.

UPDATE
According to Lenta.ru, the gunman has been arrested after an exchange of fire during which he was wounded. None of the hostages are said to have been harmed. A video report from the scene can be viewed below. 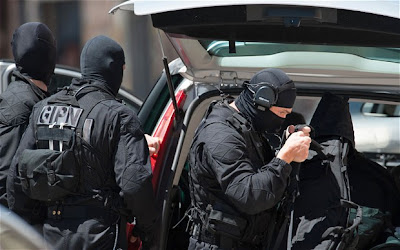