Of Meteorology and Migration: Flooding Expected

Well yes, it does look as if the rather dismal beginning to summer is set to bring more flooding, certainly if the forecast for the coming weekend highlighted by Paul Hudson on his blog proves to be correct. However, it is not only flooding of a literal nature that may be afflicting England in future, but a human deluge too, precipitated by storms of a rather different type: the economic ones battering the member states of the Eurozone.

The European Union, and the Eurozone in particular, appears to have entered an age of constant crisis. In the case of Greece, bailout package has succeeded bailout package, each one being heralded as the ‘solution’ and an end to the crisis, only to give way to another wave of panic as the country’s economy shrinks and the consequent need for capital necessitates another massive injection of cash. Fears of contagion grow, with Spain and Italy seen as being the next in line to default followed by Portugal and Ireland. The Spanish economy totters and its banking system begins to quake, leading to another bailout package that looks to be nothing more than a stopgap. Worried eyes now alight upon Italy, but Mario Monti denies that his country is in need of a bailout.

With unemployment rising as rapidly in Greece and Spain as their incomes are falling, freedom of mobility within the EU means that increasing numbers of economic migrants are likely to flock to England owing to the perception that it offers better prospects than their own countries, despite our own dismal economic plight. However, with the Spanish and Greek unemployment rates already standing at circa 24% and 22% respectively, a migratory flow born of desperation is comprehensible, although not from our perspective desirable. If the bailout packages for the two countries fail, what impact will this failure have upon their respective ailing economies? A mass migratory pulse seems likely, and the Home Office acknowledged at the end of May that it was already planning for such an eventuality following a possible fragmentation of the Eurozone associated with a Greek exit from the currency. I may be proved wrong, but I suspect that such ‘plans’ are little more than a few soundbites being readied for deployment when the human wave breaks, explaining that “Our hands are tied. We can do nothing to prevent this.”

More clearly than ever, the folly of EU membership and its no borders policy is hitting home. I bear no animus towards the Greeks, Spanish, Italians or any other people in Europe either collectively or as individuals, but one single incontrovertible fact that we need to face up to is this: we have room for no more people in our country. We already face a demographic crisis, born largely of the dismantling of our border controls and immigration from the former colonies and other non-European states. For all of the media focus upon European immigration, it is immigration from Asia and Africa, particularly Muslim immigration, that has added substantially not only to our numbers in recent decades (particularly since the advent of the Blair Government) but also to our social tensions. A mass influx of Greeks, Spaniards and Italians would place great pressure upon our housing stock, labour market, transport infrastructure, health and other services, but it would not challenge the code of values upon which our society is based, unlike the immigration that has emanated from Africa and Asia.

The EU represents a failed experiment and as such should be dismantled, allowing each member nation to regain its sovereign right to political and economic self-determination. Greece may find an exit from the Eurozone painful in the short-term, but might this not ultimately be its best option?

Although Edward Gibbon wrote his magnum opus the ‘History of the Decline and Fall of the Roman Empire’ over two centuries ago, his observations as to the benefits of the political fragmentation of Europe in his own day as compared to its unity under Roman imperial authority seem apposite when discussing the EU today:

The division of Europe into a number of independent states, connected, however, with each other, by the general resemblance of religion, language, and manners, is productive of the most beneficial consequences to the liberty of mankind. A modern tyrant, who should find no resistance either in his own breast, or in his people, would soon experience a gentle restraint from the example of his allies, and the apprehension of his enemies. The object of his displeasure, escaping from the narrow limits of his dominions, would easily obtain, in a happier climate, a secure refuge, a new fortune adequate to his merit, the freedom of complaint, and perhaps the means of revenge. But the empire of the Romans filled the world, and when that empire fell into the hands of a single person, the world became a safe and dreary prison for his enemies. (Vol. 1, p. 94).

The governing orthodoxy of the ruling elite is that were Europe to return to such a state of political fragmentation, then tensions would likely result in World War III. This threat has been repeatedly wheeled out by advocates of the European superstate, and constitutes a blatantly cynical attempt to impose a form of soft authoritarianism through proposing a false either/or juxtaposition between ever closer and tighter economic and political union and resurgent European fascisms. Millions of us across Europe desire neither, and instead favour a return to Gibbon’s patchwork of independent states, where liberty will always find a place to flourish.


A new Europe after the fall of the Treaty of Rome? 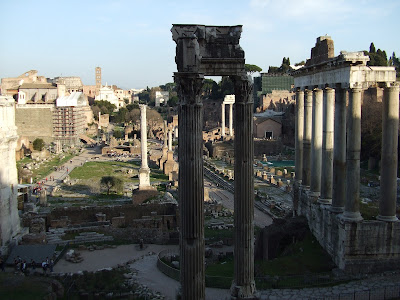