George Osborne’s announcement in yesterday’s Autumn Statement brought little cheer to anyone, but for all of Labour’s jeering about the Condem’s inability to set the economy back on track, it is salutary to recall that it was the reckless excessive indebtedness incurred by the last Labour administration together with its full exposure of the UK’s capital markets to the full shock of globalisation that landed us in the economic predicament in which we find ourselves. Labour may call for additional public spending – its ‘Plan B’ option – but their proposals would simply incur yet more borrowing. Already, it has been announced that the UK could well lose its triple A credit rating next year, but if Labour had been in power, it is probable that this would already have gone.

Buried amidst the general gloom of his speech were a few faint glimmers, which no doubt were intended to garner positive headlines. Thus, besides the widely anticipated announcement that duty on petrol and diesel would not increase by the planned three pence per litre early in 2013, it was declared that the Chancellor intended to boost government investment in infrastructure projects. However, a significant chunk of this money – some £1 billion – has been set aside for the extension of the Northern Line to Battersea. Why? Is such an extension worth the money? How could it possibly merit such a massive investment? Could this money not be better used to improve rail services in the regions away from the capital, where rolling stock is often overcrowded and lines closed by Beeching could be usefully reinstated, easing congestion on the roads and assisting local economies?

The Campaign for Better Transport (CBT) has identified many decommissioned railway lines which it would like to see brought back into operation. One such example would be the reinstatement of the Skipton to Colne Railway, which would serve as a link between the Airedale Line and Lancashire. With respect to the Skipton to Colne link it states:

The 11.5 mile link between Skipton (North Yorkshire) and Colne (Lancashire) would link the Aire Valley and Yorkshire to East Lancashire, Manchester, Preston and beyond. Although under increasing threat, the trackbed is essentially intact and the railway could be restored at a relatively low cost: any further incursion would destroy a resource of national value and would be contrary to government policies.

Similarly, it is estimated that it would only cost £37 million to reopen the 10-mile line from Portishead to Bristol, which would be sure to ease commuter traffic. A Portishead Railway Group has been set up to campaign for its reinstatement.

Too much of our investment is focused upon London. We need to direct more of our infrastructure investment away from the capital with a view to assisting an economic kickstart in our regions. We, after all, were left with the multi-billion pound bill of paying for the construction of the Olympic complex in Stratford that most of us will never see and never benefit from. In general, London sucks in too much from the rest of the country, and a considerable part of its population isn’t even English. The £1 billion earmarked for the extension of the Northern Line should be taken away, and redirected to fresh regional rail initiatives instead. 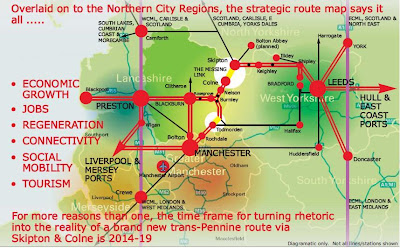