The National Secular Society (NSS) has this week drawn attention to a poll conducted by German newspaper Frankfurter Allgemeine Zeitung (FAZ), the subject of which was German attitudes towards Islam and Muslims. Its findings illustrate that, quite justly, the majority of Germans do not look favourably upon Islamic doctrine, and the NSS article notes that the attitudes in this poll differ little from those displayed in one of a similar nature conducted in May 2006. However, it is a great pity that details relating to the size of the sample size, its composition and the timing of the research was omitted not only from the NSS piece, but also from the original FAZ article.

The paper, somewhat dramatically, calls the results of the poll “catastrophic”. Why? It is clearly making a value judgement with respect to the opinions and attitudes of ordinary Germans, and presumably, owing to its use of the word “catastrophic”, finds that many Germans lack the politically correct view of Islam that the paper would wish to endorse and promote.

A total of 21 statements on Islam were offered to respondents who had to select which ‘most closely reflected their opinion’. The NSS article summarised some of the key findings as follows:

83% of them think that Islam is associated with impairing women’s rights; 77% thought Islam was a literalist religion; 70% said Islam is associated with religious fanaticism and radicalism. A significant part of Germany’s population also believes that Islam is ready for violence (64%), hatred (60%), active missionary activity (56%), and striving for political influence (56%). Only 13% of respondents associate Islam with love for neighbours, 12% with charity and 7% with openness and tolerance.

These results do not differ much from a similar poll conducted in May 2006, although that poll was taken at the height of the Mohammed cartoons controversy.

Why are such findings deemed to be controversial when there are clearly strong factual underpinnings for all of the ‘negative’ opinions about Islam listed above? It would be far more worrying were members of the German public not to hold these generally factually correct views about Islam.

With respect to the question “Do you think tension in relations with Muslims will grow in Germany in the nearest future and should we be afraid of it?” only 29% of respondents believed that there was no threat. However, it is not clear what percentage of the sample was Muslim and non-ethnically German, so it is probable that the figure supporting this statement amongst ethnic Germans was higher than the 71% cited. Overall, the poll is of interest insofar as it gives us a suggestion as to the general public mood in Germany with respect to Islam, but it is a great pity that details relating to the size and composition of the sample have been omitted. Further results from the FAZ article can be accessed at the NSS article here. 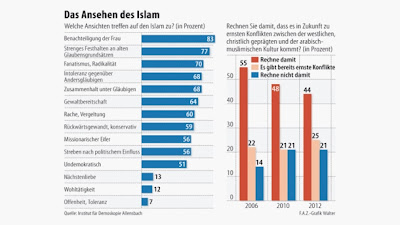