As with Ed Miliband’s speech on ‘Englishness’ in June, his speech on immigration at the end of last week was used as a pretext to launch into another ‘celebration’ of Britain’s, particularly England’s, newly found ethnic ‘diversity’ (i.e. Balkanisation). Whereas the first of the speeches was trailed as Miliband recognising that Labour had ‘got it wrong’ with respect to its routine demonisation of Englishness and its equation with ‘racism’, and the second as an acknowledgement that Labour had ‘made mistakes’ in its open-door immigration policy, neither in fact proved to be the case; Miliband provided his own definition of ‘Englishness’ that denied the English the right to their own identity, and ‘apologised’ for mass immigration by stating that we had not done enough to help the immigrants. So, for all of his toying with ‘Blue Labour’ rhetoric, even the substance of that strand of thinking within his party proves to be excessively unpalatable for him.

Following the Olympic opening ceremony, I noted how ‘It was not so much a celebration of national identity, as of a post-national notion of Britain as a hyper-globalised space, in which its people were depicted as being displaced by incomers at an every-accelerating pace’, and indeed, Ed Miliband picked up on this theme, but not as cause for lamentation, but for ‘celebration’. Miliband stated:

‘the whole Olympic experience reflected the diversity of modern Britain. So it was an immense achievement for our country and it reflects a crucial reality about our nation today. Social, cultural and ethnic diversity has made us stronger.’

What facts does he provide to back up such assertions? Why is it ‘crucial’? How has it ‘made us stronger’? Clearly, it is not 'crucial' and it has not 'made us stronger', and he did nothing to bolster his argument other than continue to repeat such assertions in a variety of verbal forms throughout the remainder of his speech. The reality is that the ongoing Balkanisation of Britain has helped to fuel riots, demands for special religious privileges, restraints upon freedom of speech and expression, discrimination in the workplace in favour of those of a non-indigenous background, a diminution in animal welfare standards, and increased stress upon our public services, whether they happen to be health, education or social security.

The Daily Mail was not impressed with his speech, and noted that ‘There are now around a million households where no on speaks English.’ What do these ‘million households’ add to our country, other than a deadweight? How many millions live in these households altogether? They constitute an extreme drag upon our economy, and deny homes to our young couples who wish to start families but are unable to do so because many larger dwellings are filled with non-English speaking immigrants. Furthermore, the enormous decadal increase in population brought about by mass immigration and the immigrant-descended population has assisted in inflating the property market and making homes unaffordable; it is an increase that has helped to choke our roads and to overburden our trains. All of this we must now suffer at a time when our economy is at best at a standstill. Our standard of living, whether measured in monetary terms, in the quality of our housing, in the general standard of our environment or in the services that we receive, is falling, and yet we are told that it must fall still further because of the ‘decarbonisation’ of the economy, whilst we make room and accommodation for more immigrants. And these observations of course, do not take into account the broader negative cultural impacts. Miliband, naturally, does not see let alone acknowledge any of these objections.

A thread that ran through both of Miliband’s speeches was his reference to his ‘refugee’ parents, to his family’s Jewishness and to ‘the terrors of the Nazis’. This, evidently, he perceives to be a useful means of implying that anyone who should object to mass immigration and the impact that it has wrought is somehow spiritually at one with ‘the Nazis’. It is of course a nasty and baseless insinuation, but he is happy to use it. In this latest speech, he made this incredibly explicit, by praising the Babel at a London school and claiming that ‘the British people have embraced this diversity’ before immediately launching into the observation that:

‘frankly we’ve had our fair share of doomsayers in Britain over the years. From Oswald Moseley in the 1930s, Enoch Powell in the 1960s to Nick Griffin today.’

This theme was later picked up when he asserted:

‘Division, racism and prejudice were features of everyday life for far too long in the Twentieth Century.’

So, there you have it: to object to mass immigration, globalisation and ensuing national self-dissolution is according to Miliband tantamount to fascism. Out of the three men he mentioned, Powell was the only one who was decent, and he has, contrary to Miliband’s speech, been proven correct in his observations and predictions. Whereas Miliband’s speech upon immigration will be largely forgotten in a decade’s time, Powell’s is an historical artefact that will remain.

As is customary not only for the Labour Party, but also for the BBC and UKIP amongst others, Miliband chose to emphasise Eastern European migration, omitting to mention that the majority of immigrants over the past 15 years have not come from within the EU, but from Asia and Africa. The census figures released this week confirm this.

Miliband announced that the learning of English was key for future ‘integration’ and stated that ‘We must live together across communities’. Already we have seen our capital city become not only non-English but also non-British, and if you live in a small town or in rural England, do not think that Miliband does not have plans to transform your world, for he also stated:

So, if you should think that the building of social housing in our county towns and villages would be primarily to accommodate local people who cannot afford to buy their own homes, think again. Under a Labour administration – and probably under the current Condem Government – such homes may well be used to help enforce ‘mixing’, with immigrants being relocated from the globalised urban centres which were once English cities to a location near you. Will there be a Somali ‘community’ in Bridport for example? Ed Miliband would doubtless be delighted at such a prospect.

Labour's 'One Nation' is no nation at all 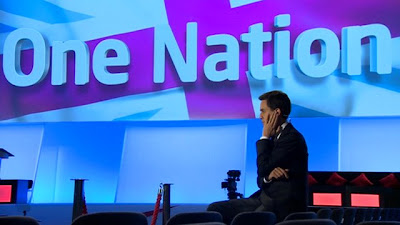