Although this documentary admittedly contained some interesting and often alarming footage, it slotted neatly into a genre of sensationalist television that appears to have become more frequent in recent years related to extremes of weather. Many people did have their homes and livelihoods wrecked by the floods of 2012, which in the case of Hebden Bridge, came more than once, but the irritating over-dramatised inflexions of the narrator’s voice brought to mind a local radio presenter given free rein to make merry with a camera crew. The portentous music simply added to the irritation factor. If you were hoping for a piece of television that brought you any form of in-depth and dispassionate analysis, this was not the programme for you.

At one point, someone created ‘artificial floodwater’ by placing a number of foul items in a tank: muddy water, semi-decayed leaves, engine oil, antifreeze, human faeces and a dead rat: Blue Peter for ghoulish adults. Distinctly unpleasant, but at least it didn’t contain any Findus ‘beef’ lasagne.

In 2012 we may have witnessed the wettest summer for a century, but surely most people cannot have such short memories that they do not recall the almost equally appalling wet summers of 2007 and 2008? In fact, we’ve had a run of dreadful summers in recent years. As the programme went on, the only thing keeping me on tenterhooks was waiting for the moment that the narrator eventually attributed this weather to ‘climate change’. It didn’t quite come, although it was suggested via the comment that “flooding may become more frequent in the future”, and the observation that whereas the Thames Barrier was raised only four times in the 1980s, this rose to 35 times in the 1990s, and this century it has already gone up 86 times, with five closings in one week last December: “there are indications that flooding is getting worse” intoned the presenter. Alan Partridge’s inflexions were present, but the narration would have been far more entertaining and agreeable had it had been placed in the capable hands of the fictitious DJ.

One factor that the programme completely omitted to address was the fact that in recent decades an ever-greater expanse of land has been built over, and a disturbing trend has emerged in some areas for gardens to be paved over. All of this, unsurprisingly, has led to a greater rapidity of water runoff, with predictable consequences relating to the inability of sewers and watercourses to cope with the resultant surge in excess water. As the population has rocketed, not only has the problem of flooding become worse, but when we are not experiencing protracted periods of rainfall, drought warnings often seem to be close at hand, leading to the demand for ever-more reservoirs and higher water bills to pay for them: yet another ‘benefit’ of mass immigration and the attendant high birth rates amongst immigrant populations.

All in all, some 8,000 properties across England and Wales are reported to have been damaged by flooding in the past year, with the resultant cost exceeding £1 billion. Quite how much damage it has caused to agriculture was not touched upon, but the losses in low-lying areas such as the Somerset Levels must have been considerable. The Yorkshire seaside town of Whitby was particularly badly hit, with a terrace of cottages falling victim to demolition thanks to a landslide. As for the nearby landslip from the cliff-top St Mary’s Church resulting in the disinterment of mediaeval human remains in the resultant rubble, this will probably serve as grist to Whitby’s gothic mill.

The weather in 2012 was wretched and the water table across the country remains perilously high. We desperately need a break from the rains, but will we get it? As yet, no long-range weather forecasts for the spring of 2013 appear to have been issued, but owing to the general inaccuracy of such items (whether produced by the Met Office or independent weather prophets such as Piers Corbyn), this should come as no surprise. 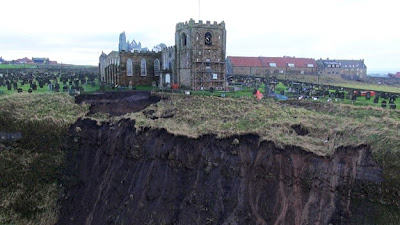