John Lydon: Diversity in the UK

It has been quite a while since I last watched Question Time, for viewing the programme makes for a highly predictable and unsatisfying experience. The panellists, even if they happen not to be politicians, tend to trot out responses that can be anticipated well in advance, and the specially selected audience fulfils the formulaic role of fielding approved questions and providing the type of applause desired by the producer. So, it was somewhat against my better judgement that I decided to view the latest programme on iplayer this evening, not having wished to deprive myself of sleep last night. The honorary non-politicians in this episode proved to be John Lydon and Dominic Lawson, the former presumably invited onto the programme as some sort of ‘jubilee’ curio, given his unofficial role in the Silver Jubilee of 1977.

There may be those who view the affluent LA tax exile Lydon as some sort of ‘rebel’, but not suffering from such a delusion myself, I anticipated a predictable performance from Lydon, and this is what we received. As performances go, it was not very entertaining, and it was a struggle to keep viewing. The faces and the voices may vary from week to week on Question Time, but the song remains the same. Lydon’s presence was to prove no exception, with his first utterance – “A parliamentary committee cannot be trusted!” – being intoned and delivered in embarrassing pantomime fashion, setting the scene for the remainder of the programme; “I don’t know anything at all,” he continued. Quite. Dominic Lawson could be seen looking on with an air of resigned disapproval.

What was his opinion on the new citizenship test? What was his view of Britishness? Was it an unorthodox view? Hardly. Lydon trotted out the most stultifyingly conformist and ‘on-message’ definition imaginable:

A complete understanding of your love your of neighbour, your culture, your country and the inclusion of all religious, race, creeds and colours and philosophies. We are an island culture. We always have been and we must keep our shore open. This is what improves us. Hello, I’m a classic example of mix and match. Hello England!

He followed up with the question: “Please, can you give one [i.e. a citizenship test] to the people that are already here?” Predictable? Yes.

Once upon a time he may have screamed about ‘Anarchy in the UK’, but nowadays it would seem that he is rather more in favour of ‘diversity’ than ‘anarchy’, which in some respects could be seen as near synonyms, but it is unlikely that this is the sense in which he wished his ‘celebratory’ remark regarding this word to be taken.

The least disengaging section of the programme consisted of Louise Mensch’s drugs confessional, during which many members of the audience gurned with disgust (whether genuine or feigned it was hard to discern) as she recounted the negative psychological impact that using unspecified Class A drugs had had upon her. Normally, I don’t have any time for Mensch, but for the couple of minutes during which she spoke upon this theme, she did something unusual for a politician: spoke honestly and from direct experience. Lydon however, predictably made some rather juvenile points about the issue, implying that there was a conspiracy (not involving lizards on this occasion) to cover up the ‘truth’ about drugs.

Irrespective of the positions held by the panellists upon the status of illicit drugs, to criminalise individuals for abusing such substances is wrong, not because I would wish to condone or encourage such usage, but because the abuse of such substances should be dealt with as a matter of public health and education. Rehabilitation is the right approach, not punishment. Criminalising drug users is akin to criminalising those who attempt suicide or self-harm: essentially inhumane.

So it was that last night’s episode of Question Time proved to be true to predictable form. For the producers, all was well with the world, for diversity was celebrated, an ageing ‘rebel’ was brought into the fold, and John Lydon delighted replica torque manufacturers across the land by wearing such an item around his neck; admittedly, not as elaborate as anything found in the Snettisham Hoard, but a torque nonetheless. As for Question Time, I shall once again bid it farewell, and resist tuning in until such a time as it looks like something may be said that isn't completely predictable. 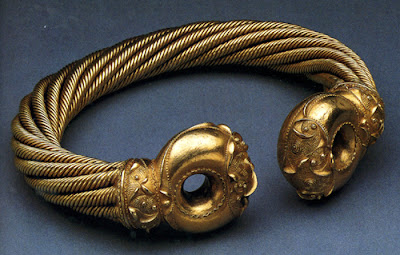