In a rare moment of candour, an article on the BBC website today finally acknowledged through quoting the Office for National Statistics (ONS) that population growth (fuelled predominantly by historically unprecedented mass immigration) had contributed to a significant decline in disposable income in the UK. The average figure fell by 1% during the first three months of 2012 compared to the preceding months, with the amount of disposable income reaching its lowest since 2003.

The protracted structural economic crisis doubtless underpins this decline, but this negative economic situation is heavily exacerbated by rapid and unhelpful population growth. On a per capita basis, the report reveals that pre-tax income declined during the period in question by 0.6%. The ONS stated:

sustained population growth led to incomes being spread across a greater number of people, and therefore further reduced the growth of actual income per head.

To describe a decline in both pre-tax and disposable incomes as “growth” is one of those peculiar particularities of conventional economics, but the wider notion of “growth” as being an essentially good thing, irrespective of what that “growth” actually consists of, is a dogma that needs to be laid to rest if we are to effect true improvements in our standard of living and quality of life in this country. The focus upon an increase in aggregate rather than per capita GDP is, in general, something that can actually lead to a concrete deterioration in both our daily lived experience and indeed in our individual incomes.

Retailers for example, are enthusiastic about a growing population, for this implies more prospective consumers to shop in their outlets; builders too, for this necessitates the construction of ever more homes (the rooms of which seem to grow smaller as average girths grow wider); an increase in the number of passengers on already overcrowded rail services may be seen as positive by various rail companies, but do we as commuters appreciate the consequences of such “growth”: nowhere to sit and often scarcely space to breathe? As the population grows the infrastructure – particularly in densely populated England possessing an average of 407 people per square kilometre according to the 2011 Census – creaks: traffic jams grow longer and more frequent; drought orders are issued sooner and take longer to lift, and we are urged to adopt water meters to conserve a precious “scarce” resource; pressure upon our housing stock grows, as do voices calling for the lifting of planning restrictions designed to protect our countryside.

For the conventional economist, population growth is therefore seen to be a “good thing”, whereas for the mortals who have to live with its consequences, the negative impact of such a demographic surge far outweighs any superficial nominal benefits that may be said to have been accrued. Yet, despite such pressures brought about by the negligent policies of the current government and the wilful design of its predecessor, few are willing to take a critical stance on this issue and call for a solution that would readily improve our lives: a rational demographic policy aimed in the long run (i.e. over the coming century or two) at reducing our national population to sustainable limits of circa 25 to 30 million. However, those who support Population Matters - such as David Attenborough and James Lovelock - are notable exceptions.

The example of the widespread failure of India’s electricity grids over the past two days should serve as a warning as to what could happen to us if we do not constrain our population at a level commensurate with the power and resources that we can practically make available. As our government is also signed up to treaties that insist upon a considerable cut in our aggregate energy consumption, the addition of millions of new citizens implies that we must all make do with far less, in other words, experience a sustained cut in our standard of living for the sake of immigrants from countries which fail to cater to the needs of their citizens. Such a reckless demographic policy must be curtailed, for otherwise, we consign ourselves to an increasingly immiserated and insecure future, in a grossly overpopulated world where demands for food, territory, energy and water become ever more intense. We need to produce more food and energy domestically, so as to enhance our national security, and to improve the lot of our people. Other nations need to turn to the needs of their citizens too, and to institute sensible demographic policies, instead of exporting their population problems to Britain and the other countries of the West.

Africa, and significant swathes of Asia, need to learn how to use the condom and the pill. It is still, just, within their gift, to choose to solve their population crises humanely and rationally, yet if they do not - which currently appears to be the greater likelihood - then the bitter Malthusian lessons of unrestrained reproduction will doubtless have to be learned through great hardship and unnecessary death on a mass scale. We have no reason to be dragged down by such folly, yet our current crop of politicians appear intent upon letting just such an eventuality unfold. Our incomes may be falling now, but if a radical change in the existing political landscape and general approach to policy is not brought about within the next decade, then the risk will be that our current economic woes will seem utterly insignificant. 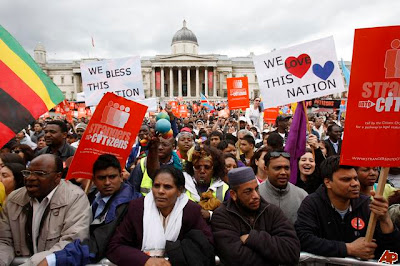