Although the trial of Pussy Riot has currently made the international news (see forthcoming article after sentencing), much that goes on inside Russia, particularly if it is outside of Moscow or St Petersburg, passes largely unnoticed by the outside world. Last month, an Islamist double attack on prominent Tatar Muslims critical of Salafism led to the death of Tatarstan's Deputy Mufti Valiulla Yakupov and the serious wounding of the Chief Mufti Ildus Fayzov, prompting a Spetsnaz operation that rounded up many Islamist militants. Now however, it would seem that Tatarstan's Islamist problem may be embedding itself within the republic's official structures, for allegations have emerged that Tatarstan's police have been "pandering to Islamists".

Izvestia reports that deputies of the Russian State Duma have requested an explanation from Tatarstan's General Prosecutor's Office for the failure of police to intervene in recent meetings, where representatives of Hizb ut-Tahrir (a proscribed organisation in the Russian Federation) gathered alongside Tatar separatists and flew flags emblazoned with the organisation's slogans. The meetings at which these symbols are said to have been displayed were held in protest at the Spetsnaz crackdown on Islamists following the double attack. Aleksandr Starovoitov, a deputy belonging to Russia's Liberal Democratic Party (LDPR) - a rather different beast to our own Liberal Democrats - told Izvestia:


That representives of separatist organisations and even of banned extremist organisations came out bears witness to the fact that the Tatarstan authorities may fully share their views, if not support them.

That a figure such as Starovoitov might be inclined to make such a statement is not surprising, but is there an underpinning factual basis for his assertion? It would seem that comments by other Duma members would suggest that there is, for the Head of the Committee on Nationality Affairs Gadzhimet Safaraliev told the paper:


The appearance of flags of such an organisation as "Hizb ut-Tahrir" is completely inadmissible. This is an extremist organisation banned by the courts. And that the Kazan police in no way reacted to the appearance of such symbols on the streets of the city represents a failure to discharge their duties.

Today they march with flags, tomorrow with machine guns. Such activists must be called to account. The General Prosecutor's Office must deal with this.

Tatarstan's Ministry of Internal Affairs refused to comment on a meeting of the Tatar nationalist group Azatlyk (the Union of Tatar Youth) at which Hizb ut-Tahrir flags were said to have appeared, although it did acknowledge "that there were flags with Arabic inscriptions". As commented previously, it is unfortunate that many young Tatars of a nationalist inclination are falling into the trap of identifying with Islamism as the primary facet of their being, for after all, Hizb ut-Tahrir's call for the establishment of a universal caliphate has nothing to do with autonomy or political self-determination for the Tatar nation.

Although Russia does possess a genuine problem with civil liberties owing to the routine abuse of power by influential members of the political elite, as exemplified in the current Pussy Riot trial, it appears that those who have no genuine respect for such liberties, just like their Islamist counterparts in Britain, are happy to invoke the name of Western civil rights and freedom of expression in order to subvert those values. Nail' Nabiullin, the Leader of Azatlyk thus told Izvestia:


Our organisation is unregistered and up to this point we do not wish to be registered, since as soon as we had registered, they would ban us immediately. Now the authorities exert strong intimidation against activists, so that they don't conduct any activities or pickets. This is done through institutions of higher education, which they threaten to purge.

I am not acquinted with the flags of "Hizb ut-Tahrir". Although, of course, at the last meeting there were people with flags with Arabic inscriptions. They translated them to me as "There is no God but Allah".

Quite how far Azatlyk is focused specifically upon the Islamic inheritance of the Tatars is hard to say, since my knowledge of Tatar and the other Turkic languages is minimal to put it mildly. However, a report appearing on Russia's Ria Novosti today revealed that Nabiullin had led a protest on Sunday "against the mass detention of Muslims afer the double attempt on the lives of Muslim leaders in Kazan". Given the focus of this protest and the fact that it was jointly organised by Azatlyk and Kazan's Al'-Ikhlis mosque, it would seem to have a heavily Islamic, possibly Islamist, bent. Altogether, it is said that circa 100 individuals participated in the protest that passed off peacefully.

The growth of Islamism across the Russian Federation - particularly in those constituent republics and regions hosting a traditionally Muslim population - is a cause for concern, for the differential birth-rates between Muslims and non-Muslims is pronounced; the long-term decline of the ethnic Russian population continues, whilst the Muslim population booms. Many analysts, both within the country and without, must be posing the question of whither Russia should a Muslim majority hold sway in a few decades time? Such an eventuality would be positive neither for the Russians, nor for the rest of the world. 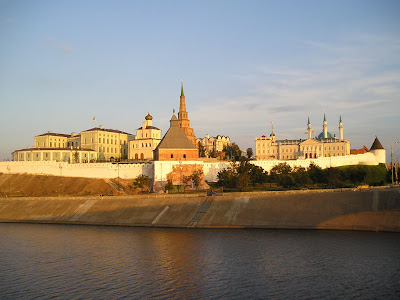