The video and pictures below illustrate the disruption to the daily life of the Russian capital that has become a familiar part of each Eid in recent years. Once again, thousands of Muslims have blocked streets with their prayers and 3,000 additional police were laid on to ensure that all passed off peacefully. Russia Today reported that:

Russian President Vladimir Putin congratulated Russian Muslims on the eve of the holiday, wishing them welfare, health, and success in good deeds. Putin said that by their "fruitful" activity, Muslim organizations are making a significant contribution to the preservation and development of Russia's national and cultural traditions.

Many members of the public in Britain and elsewhere who have no direct experience of Russia or who do not understand Russian harbour the misapprehension that Putin is some species of Russian ethno-nationalist. He is not. Putin is an opportunist statist, willing to use whichever elements of ideology – including some trappings of nationalism – for the benefit of himself and his supportive clique of oligarchs. Given this, he has no misgivings about treating with Islam, even with literalist interpretations of it as promoted by Putin loyalist and Chechen President Ramzan Kadyrov. Russia under Putin is therefore no bulwark against the Islamisation of European societies, although ordinary ethnic Russians – non-Muslims – are alarmed by what is happening to the demography of Moscow and the country at large.

Yesterday, it was announced that an agreement had been reached to construct a 60,000-capacity mosque on the outskirts of Moscow, but today, new demands have been made by the Council of Russian Muftis, calling for the building of a mosque in each of Moscow’s administrative districts. This would of course have a dramatic impact upon Moscow’s character and symbolise its accelerating Islamisation, a fact not lost upon ordinary Russians.

The comment thread attached to the article dealing with this announcement in today’s edition of Izvestia makes for interesting reading, providing as it does an insight into the thoughts of Russian readers. I have translated a number of these below that reveal a deep sense of unease amongst many ethnic Russians about the Islamisation that is being brought about by inefficient immigration legislation and Russia’s own version of multiculturalism. Some readers of a sensitive nature may find elements of what is reproduced not to their taste, but I have not bowdlerised the translations, and nor should it be taken that I necessarily agree with all of the sentiments expressed. Reaction to the announcement regarding the proposed mosque-building programme was uniformly negative. For those of you who read Russian, some screengrabs of the comment section appear after the video and pictures.The full thread can be accessed here.

Russian readers express their opinions on Islam in Moscow
Igor Kaftailov: “Russia needs to be cleansed of the Muslim plague, and no more mosques built. But our filthy venal authorities of course, will lick the backsides of the muftis all the same.”

Tamara Sheverdina: “That was also precisely WHY the BYZANTINE EMPIRE collapsed . . . Now Constantinople is in the hands of the Turks . . . And everything started out just as now . . . The Muslim religion is false and bloody.”

Russkii Ivanov: “This is just as in the Russian fairytale: “There was a hare with a little wooden cottage, and a fox with one of ice . . .” In Soviet times there was STRICT regulation of the movement of the slit-eyes [by which he presumably refers to Central Asians] from one place to another. Everything was regulated, therefore we lived NORMALLY.”

V.P.P. – V.P.P. – “Move the capital of the Muslims from Kazan to Moscow and the Kremlin! And the capital of the Orthodox ETHNIC RUSSIANS from Moscow to the Kazan Kremlin, together with the President and the Prime Minister of the Russian Federation!”

Alexander Lv: “For the whole of their existence, the ethnic Russians have struggled with the consequences of the Tatar-Mongol yoke, and here we now find the Judases are prepared to lay themselves down before the Muslims again. Today, even the NTV News started not with an Orthodox but with a Muslim celebration. I would sooner hear Russian bad language on the street than incomprehensible Muslim babble.”

Sergei Avramov: “Muscovites must come out and organise protests against the building of mosques. We must understand, that the Muslim yoke is being placed Moscow. Ethnic Russians must show the guests who is the master in the home, and show them their place. If our authorities do not wish to allow this, then there has to be a problem for them. Ethnic Russians – we need to organise ourselves, change those in power and defend our historical roots. Yet, under the pretext of tolerance we are abandoned to the enemies of the Russian people.”

Petr Petrov: “If we wait and nothing changes then perhaps it will be too late. We are supporting not the ethnic Russian citizens who founded the state, but foreigners.”

To Monin: “We ethnic Russian folk must oppose the penetration of Muslims into our society.”

Iurii Shchekin: “But in the mosques we shall rear pigs, then they will be useful :-)”.

To Monin: “We - the ethnic Russian folk - must become a single force, capable of resisting the influx of Muslims into our SACRED RUS’.” 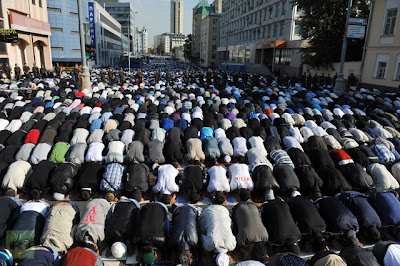 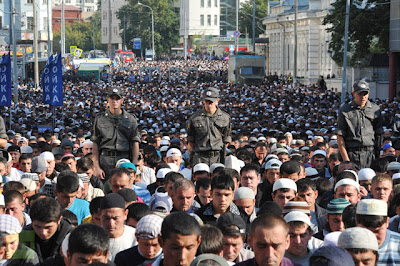 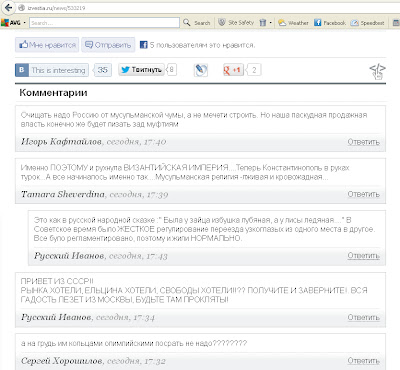 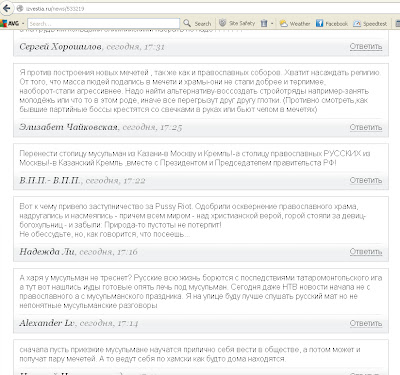