Members of the EDL have been demonstrating in Chelmsford today. The demo is said to have been occasioned by the granting of permission to rebuild a mosque in the city named the Shia Ithna Asheri Jamaat. According to Chelmsford Weekly News, an earlier EDL protest on 21st July resulted in three of the 30 protesters being arrested “on suspicion of committing a racially aggravated public order offence” and bailed until 9th September.

Like clockwork, the announcement that the EDL were to protest today spawned a decision by the local TUC to stage a counter-protest under the UAF banner. Looking at the list of signatories endorsing the protest against the EDL, it is interesting to see not only the usual suspects such as local members of the Labour Party and leading trades unionists, but also UKIP! How strange for UKIP to align themselves with a Trotskyist front group! The city’s Conservative MP Simon Burns also backed the UAF protest.

The weather in Chelmsford, as in many parts of the country today, looks to have been fine and hot as can be seen from the videos of the EDL and UAF marchers below, and unlike in Bristol last month, it seems that there has been no trouble in the city today which must be a matter of relief for all concerned. A tweet from the EDL Support Group made at about 1pm claimed that local people were clapping the EDL. According to the Casuals United blog several hundred EDL supporters had turned up, outnumbering their opposing numbers characterised as “30 grannies, union types and scruffy hippies”. However, the second of the videos below would seem to indicate that this is a considerable underestimate of the latter. As for the EDL themselves, numbers are hard to estimate owing to not all of the protest being pictured in the frame, but it looks to be a few dozen strong, perhaps a hundred or a little over.

As the demo coincided with the V Festival today, this unsurprisingly seemed to attract more interest from the locals. Both the EDL protest and the counter-demonstration finished at around 3pm. Essex Police were happy to report that owing to their successful liaison with organisers of both protests there had been "minimal disruption to normal weekend activities in the centre of Chelmsford." An interesting eyewitness report from Chelmsford can be read on Hidden British News. A different account, more sympathetic to UAF but with some good pictures, has been produced by photographer Peter Marshall, who estimates that there were approximately 80 EDL and 200 UAF/Chelmsford Against Fascism present. He also reveals that Weyman Bennett, a man previously arrested for conspiracy to commit violent disorder at an anti-EDL demo in Bolton in 2010, led the UAF protest.

Postscript
Casuals United reports that a contingent of EDL turned up in Totnes today of all places. Why? That's hard to say. Reports of hummus in local cafés thought to relate to Hamas perhaps? Still, it's a nice place to sup a pint on a summer's day. Some EDL also paid a visit to Hebden Bridge, West Yorkshire's equivalent of Totnes. 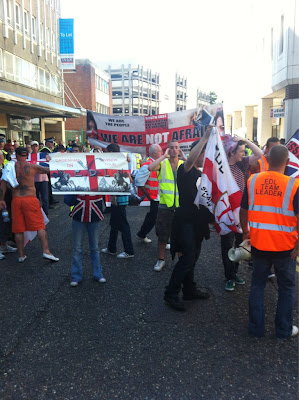 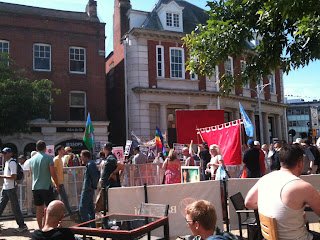