The 2011 census results show that the population of Yorkshire as a whole grew less quickly than the average across England and Wales between 2001 and 2011, increasing by 6% from 4,977,000 to 5,284,000. However, one city bucked the trend: Bradford. Here, there has been a massive increase in the officially recorded population since 2001, with a rise of 11% to 522,500. The explanation lies not only with ongoing high rates of immigration from Pakistan and Bangladesh, but also with the far higher fertility rate of the resident population originating in these parts of the subcontinent.

The age structure of Bradford’s population is unusual too, insofar as it is considerably younger than either the average for Yorkshire and Humber or for England and Wales, with 7.9% of the population under five years of age, and some 28.8% below 19 (see the table below for further details and comparison with other averages). A report on this evening’s edition of Look North noted that this rapid growth in Bradford’s young population had implications for schooling, as there is a shortage of school places in the city and no spare capacity to accommodate the under fives once they reach school age. Either new schools will have to be built, or these children will be sent to schools in neighbouring parts of Bradford district and beyond, following a path already 'pioneered' by schools such as St Bede's.

The demographic makeup of Bradford is changing, and it is changing quickly. Given the peculiarities of the city’s age structure, these changes will accelerate once schoolchildren leave and marry, and they will do so at an earlier age than the national average, and have larger families than the norm. A clearer picture will be provided by further data that will be released in December.

UPDATE: The data relating to the percentage of Muslims in Bradford's population was released on 11 December 2012 and can be accessed here. 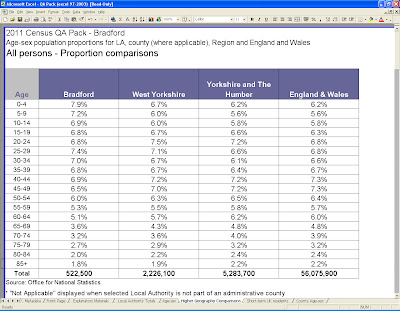