The phrase “no news is good news” possesses much merit, and the absence of “news” about arrests in Leicester yesterday must surely be adjudged to be “good news”. Congratulations are therefore in order for the organisers of the EDL demo and their supporters, as well as for the police in ensuring that this protest passed off peacefully, contrary to the shrill propaganda that emanated from UAF, the SWP and kindred groups in the run-up to the event.
This EDL demo marked something of a shift in tack for the protest movement, insofar as that its focus was not on Islamisation but upon “anti-White racism” and the neglect of this phenomenon by the judiciary and the mass media, sparked of course by the recent furore surrounding the Rhea Page case and the failure of the Judge to classify the attack upon Page and her boyfriend as a case of anti-White racism. As almost all mainstream media coverage of the EDL tends to be highly negative and Leicester yesterday proved to be bitterly cold, the EDL turnout can be adjudged to be a modest success. Estimates as to the numbers as ever vary, with their opponents in the SWP providing the lowest at 450, whereas Suzy at the pro-EDL Casuals United blog gave the highest at 1,200. The BBC and Capital FM cited figures of 800 and 700 which, being in the middle, are probably closer to the mark. What is clear however is that claims by the SWP that UAF protesters outnumbered those on the EDL side are false. UAF did not draw 700 “activists” as claimed, but somewhere in the region of 200.
Trotskyist agitator and leading ‘light’ of the SWP and UAF – Martin Smith – made a risible speech in which he made the following comment:

“The EDL are David Cameron’s monkeys. The Tories are cutting our wages and pensions, and to do that they need someone else to blame.”

Poor Martin Smith appears to live in an alternative reality in which when it comes to Islamism, Islamisation and anti-White racism his motto appears to be that of the three wise monkeys: “See no evil, hear no evil, speak no evil.” What had the EDL’s protest to do with cuts to wages and pensions? Nothing. Perhaps as a riposte to Smith’s inapt characterisation the EDL might wish to start singing “Hey, Hey We’re the Monkees!” on their marches? If they did so however, UAF could well start demanding a ban on Monkees show reruns and their ‘racist’ psychedelic pop.
Martin Smith's Three 'Wise' (Brass) Monkeys 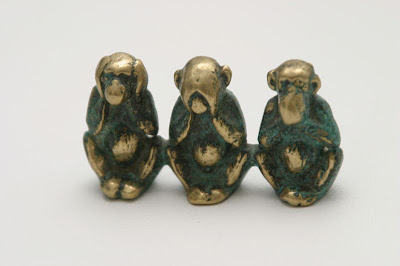 The EDL is coming up to the third anniversary of its foundation, and in the time it has existed it has certainly succeeded in generating media attention, which has unfortunately been almost exclusively hostile in tone. To have sustained itself for this time is thus something of a feat in itself, but it does seem that in terms of the numbers of protesters that it can get out onto the streets, the peak appears to have come and gone. A shift in focus and re-evaluation of tactics is thus required to propel it forward and to ensure that momentum is not lost. The recent protest against the sale of halal meat at a Rochdale Asda involving supporters of the EDL and other concerned members of the public seemed to be on the right tracks, although an Asda spokesman seemed perplexed by the protest and missed the point altogether. Whilst the Tommy Robinson endorsed tie-up with the British Freedom Party was backed by some EDL members, it did not win universal assent, and although it appears that there has been some crossover in personnel in recent months with a number of EDL joining the BFP and contributing towards its organisational structure, the two organisations remain very much separate entities, which is probably right for both of them.
Returning to yesterday’s demonstration in Leicester, the main speaker was leading EDL member Kevin Carroll. However, from what can be seen in the video of his speech below, for some reason he chose not to focus upon anti-White racism, but instead upon sending a message of support to British forces in Afghanistan and directing criticism at the Government for cuts to military expenditure that have left us without an aircraft carrier. David Cameron was singled out for personal criticism for  “dismantling our armed forces whilst we’re at war.” Although valid points in themselves, it seems odd that this occasion was chosen to make them. As indicated earlier, the EDL needs to be more focused with respect to its campaigning. Tomorrow’s EDL demonstration in Liverpool appears to be an example of this more specific approach, one which could help in winning the movement a more sympathetic hearing from the public. The EDL states: 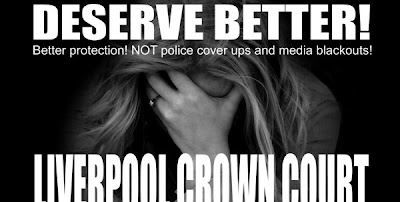 Shockingly, an anti-English hate group calling itself ‘Liverpool anti-fascists’ is planning to counter-protest against the EDL tomorrow. It shares the anti-democratic inclinations of the trades union funded UAF, Searchlight and Hope Not Hate, that together function as the semi-official enforcers of Britain's contemporary controlled 'democracy', in which certain topics that threaten to reveal the truth about the diversity dogma are deemed taboo. The EDL is breaking such taboos, which is why its supporters and activists have been targeted by these groups. I wish its supporters in Liverpool a peaceful and successful demonstration tomorrow.