No Valentine’s Turkish Delight in Goole or Scunthorpe

What do David Cameron, William Hague, David Miliband and Nick Clegg all have in common? Well, besides being untrustworthy career politicians who possess no concern for the people of this country, they are all keen advocates of Turkey joining the EU. That quite naturally, would lead to a mass influx of Turks. Quite why such an eventuality would be adjudged to be beneficial in any way eludes me, but they really are said to be “jolly keen” on the whole approach.
Perhaps all four men would be advised to take into consideration the unusual yet underreported happenings that occurred in the early hours of Valentine’s Day in the not oft mentioned towns of Goole and Scunthorpe. What occurred was not, so far as can be ascertained, any lovers’ tiff, but a number of street battles between rival gangs of Turkish men wielding “sticks and batons”. One man was deliberately run over and many were injured badly enough to warrant treatment in hospitals in Scunthorpe, Goole and Doncaster. None of the injuries were said to be life threatening, although some were reported to be “serious”.
According to the Yorkshire Post, fighting first broke out in Frodingham Road in Scunthorpe, with a later fight occurring in Old Brumby Street. The final clash took place in Swinefleet Road in Goole near to a pizzeria which is said to have been damaged. The underpinning motive has not yet been ascertained. In all, it is thought that some 25 men were involved, all aged between 25 and 40.
Speaking to The Hull Daily Mail:

Goole councillor Pat O'Neill said: "From what I hear, the trouble was more of a personal matter rather than a cultural thing. I hope there won't be any more trouble and I'd like people to remain calm."
Mrs O'Neill, who represents the area at East Riding Council, was speaking from the nearby Moorlands Centre, which has become the focus of a community that includes an increasing number of immigrants.
Incoming eastern Europeans have been able to find common bonds with indigenous people and there have been few problem, despite cultures being so different.
Mrs O'Neill said: "They are very well integrated. We have Russians, Latvians, Polish and Bulgarians. There aren't very many Turkish people, but we do have some.
"The problems we saw on Tuesday morning are how they deal with things in their own country. They've brought that culture across here. Eventually, they'll realise that's not how we do things."

Somehow, I think that O’Neill’s conclusion that “Eventually, they’ll realise that’s not how we do things” is fundamentally misplaced, for after all, Pakistanis and Bangladeshis continue to engage in ‘honour’ violence, forced marriages and first-cousin marriage decades after establishing their presence in England. Rather than becoming acculturated to our ways, they are attempting to impose their backward mores and religious beliefs upon the host society. Whatever the origin of these vicious altercations, allowing Turkey into the EU and the free ingress of Turks into our country would only serve to reinforce and entrench the mode of settling disputes and arguments which these men seemed so ready to employ. Although they may run a (now damaged) pizzeria in Goole, can the presence of these people really be said to enhance life in these two towns? As for the answer, that’s for you to judge.
Goole Town Centre 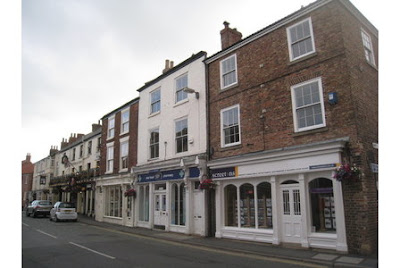