Whilst the EDL held their protest in Hyde yesterday, creatures resembling bad-tempered overgrown garden gnomes were spotted brandishing posters juxtaposing images of Anders Breivik and Tommy Robinson. It is possible that they had mistaken Robinson for a mass murderer from Norway because UAF told them that the two men were essentially the same and, of course, they’re both white and thus easily confused. We do all look the same you know. If it weren’t for the redbrick buildings in the photograph below, you could be forgiven for thinking that you were looking at a picture taken in Lahore, but this was not the case, despite the fact that the men depicted do believe that they live in a territorial extension of Bangladesh, or possibly Pakistan. 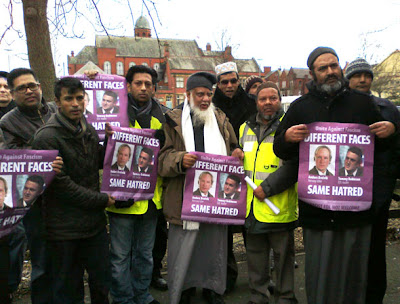 A handful of UAF activists turned up yesterday to distribute misleading propaganda to Muslims in Hyde before promptly departing. Their presence after all, was not required, for it is stated that some 800 “local people” (i.e. ex-residents of the Indian subcontinent and their descendents, so perhaps “local” is not the most appropriate of terms) “turned out to protect the local mosque in Hyde”. Protect it from what? The EDL don’t target mosques and had no intention of going near it, so were not UAF activists guilty of creating an unwarranted climate of fear amongst the Muslim residents of Hyde?
Meanwhile, in London UAF held their annual conference to fulminate against the “fascists” of the EDL and BFP. It was such a dull affair that one of their delegates was moved to write:

So bored was I during some of the eight speakers who addressed us for almost two hours in the opening plenary that I counted the number of people in the hall several times. Including people outside and in the balcony it came to about 250 on a generous count, so let’s say 350 during the day – smaller than previous years and remarkably few for the conference of a campaign backed handsomely by all the major unions. (According to NUT Deputy General Secretary Kevin Courtney, the NUT alone gave UAF £55,000 this year!) Of these perhaps twenty were members of Socialist Action and a hundred members of the SWP - the two left groups which in reality dominate the leadership of the campaign.

How very revealing. For all of its funding, official backing and media opportunities, UAF even bores its own delegates and appears to be losing momentum. The above report also provides confirmation of the SWP’s hold over UAF. Perhaps someone should notify Chris Grayling?
Returning to matters of a more positive nature, take a look at the two following speeches made by EDL supporters yesterday. The first, from a local lad named Jamie, and the second from Tony Curtis (naturally, not his deceased namesake).
Posted by Durotrigan at 19:52