Florence and the Killing Machine

Florence Anderson, it would seem, has been a little intemperate in her language. The Sunderland Labour Councillor has received a rap over the knuckles (in fact, she’s been suspended from the Labour Party – so no real concern for either side really) for calling upon the IRA to bomb the Conservative Party Conference. Why? She doesn’t like the Conservative Party. Well, neither do I, but I’ve a feeling that I probably wouldn’t get along too well with ‘Flo’ either, for if she’s called for IRA bombings against Conservatives, she’d probably request that I be knee-capped then summarily shot.
From what platform did Anderson issue this call? Why, from Facebook of course! Her precise phrasing was as follows:

“We are appealing to the IRA to find it in their hearts to bomb the next Tory conference”.

It could, feasibly, have been nothing more than light-hearted japery on the part of Anderson, who also happens to belong to a Facebook group named “Margaret Thatcher doesn’t have to be dead before we give her a funeral.” However, Florence also saw it fit to ‘good-naturedly’ append a comment to this page stating that she hopes Thatcher “burns in hell”. So, overall it looks as if any comedic intent upon the part of the suspended Labour Party member was probably lacking, and to be honest, IRA members have not exactly been renowned for their sense of humour, having had something of a track record with bombing, killing, maiming and all of that other stuff that Anderson would appear to be at ease with. Their members aren’t that well known on the comedy circuit, so far as I’m aware, and I don’t recall them having had any input to Father Ted.
Does Anderson’s comment actually constitute incitement to a terrorist act? Arguably, it might do, yet we do not know whether her tongue was held firmly in her cheek or otherwise when she posted this comment (looking at the picture below, I am not so sure. Any thoughts?).
Although the Labour Party moved quickly to suspend Anderson, can you imagine what would have happened if a member of a nationalist party or the EDL had said something similar? Do you think that they would suffer the mere indignity of suspension from their organisation accompanied by a few angry press articles, or are you of the opinion that a serious police investigation would be launched post haste? I incline towards thinking that the latter would be the most likely eventuality.
Now, although I am no fan of the Conservative Party and am of the opinion that it has done, and continues to do, great harm to my country and its people, my opposition will forever remain within the civilised bounds of disagreement, counterargument and electoral contest. Some, at various times in history in the name of many divergent causes, have however preferred to impose their will through the bullet and the bomb. In our age, we are surely all painfully aware that there are many real threats from violent individuals and groups, predominantly of an Islamist disposition, which would seek to impose their views upon us through just such means. It is to the credit of the security services that they have been so effective in interrupting and thwarting many plots of this type in recent years, yet of late the mass media has been playing up the phantom "threat" of "far-right terrorism". As commented previously, this is a manufactured threat, designed to cow individuals and political organisations opposed to globalism and the consequences that it brings.
Given the unreality of the so-called “far-right” terror threat, should we conversely put any credence upon the existence of a “far-left” terror threat? Well, there are certainly many far-left groups that advocate and instigate violence and which routinely align themselves with Islamists, and the far-left has a long history of using and claiming legitimacy for such violence. The IRA itself is a Marxist-Leninist organisation, and it is not that far back in history that the Red Army Faction and the Red Brigades unleashed their violence upon German and Italian civilians.Why then, do we not see shrill media headlines about such potential threats?
Taking into consideration the above, particularly the recent bloody history of the IRA, was Anderson’s comment a throwaway remark in bad taste; indicative of genuine malice, or perhaps, a real incitement to violence? Does it not, as Cygnus points out, also serve as a rather glaring contrast to the treatment of Emma West, who has been “charged with two counts of racially-aggravated public order offences, one with intent to cause fear”? In England today, it would seem that you are permitted to call for the bombing of your political opponents provided that they are on the ‘Right’ of the political spectrum, but if you desperately blurt out your frustrated emotions over the consequences of mass immigration on a tram, you will be put in the dock. Emma West threatened nobody with violence, whereas Florence Anderson seemingly did. Where is the justice in the disparity between the treatment of these two incidents, both born of contemporary social media?
Florence Anderson: Malign? 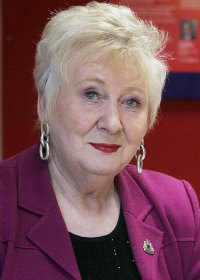