Last night, a legitimate protest connected to the trial of 11 Muslims charged with paedophile grooming and related offences was unfortunately infiltrated by a small number of troublemakers who attacked a local takeaway – Tasty Bites – on Market Street in Heywood. The takeaway had previously been in the hands of some of the accused, but is now said to be under new management. Its windows were broken, and a policeman was pelted with bricks and other missiles by a handful of the protesters, who are estimated variously as numbering 100-200. Three police cars and another car were also damaged. A 35-year-old man and 14-year-old boy were detained by police in connection with various offences committed that evening. Tonight, the police are taking precautions should there be a repeat of last night’s disorder.
Justly, the police have emphasised that the majority of those who turned out to express their disquiet were not involved in the violence. The initial group of 80 later swelled as it was joined by local “youths”, and it was after this that the trouble started.
The police have attempted to turn this into a ‘race’ issue when in fact it is clearly a religio-cultural one, rooted firmly in the ‘exemplary’ Prophet Mohammed’s taste for paedophilia as demonstrated by his marriage to Aisha. Thankfully, I know that not all Muslims condone paedophilia, for their innate decency causes them to be repelled by it; but those of a paedophile inclination from a Muslim cultural background feel fully justified in their predatory sexual acts precisely because of the actions of Mohammed, whom they deem to be beyond criticism; they do after all, believe him to be the perfect man. Such a belief is what legitimises and normalises paedophilia, particularly when practised with children from non-Muslim – in this instance English – backgrounds. It is frustrating to have to keep reiterating this basic fact, but it does not seem to penetrate the logic-resistant minds of the defenders of Islamic doctrine and practice, both Muslim and non-Muslim alike. This sort of attitude is one of the unfortunate consequences of “diversity training”. People’s minds need to be purged of such false beliefs so that they may think openly, critically and logically once again.
The eleven men standing trial in Liverpool have yet to be sentenced, so we should not prejudice its outcome. However, if they are to be convicted, this will be yet another instance in a long line of such cases involving Muslim men targeting underage English girls and sexually exploiting them, in accordance, as it seems necessary to underscore once again, with the ‘inspirational’ example of their Prophet Mohammed.
Tomorrow the EDL will march in Hyde to protest against a vicious Muslim pack attack on Daniel Stringer-Prince and his friend Kavan Brown. This march and last night’s protest were not, as the police and opponents are claiming, an attempt by ‘racist’ groups to capitalise upon these incidents for their own ends, but an expression of frustration over the refusal of politicians, the police and the mass media to tackle the serious issues of Muslim paedophile grooming and pack attacks, which both target English non-Muslims. These are real phenomena that need to be publicly acknowledged and tackled, instead of being ignored and swept under the carpet for the sake of so-called “community cohesion”. What sort of cohesion is there, when criminal elements within the Muslim population feel that they can prey upon the English in the knowledge that politicians and the police will often turn a blind eye? This is why the EDL, Casuals United and a number of other groups sprang into existence, not because of some desire to ‘scapegoat minorities’ in a time of recession, as some ignorant commentators have claimed.
The EDL, Casuals United and kindred groups have the right to protest about issues that they deem to be unjustly hidden from public view, but nobody has the right of course to attack innocent individuals, businesses or the police. It was therefore unjustifiable for anyone to have attacked the takeaway in question last night, causing unwarranted fear, distress and loss of business to its proprietor and staff.

Worryingly, the police have become increasingly politicised in recent years, and this was reflected in a statement by GMP Superintendent Chris Hankinson who stated at a press conference on events in Rochdale that:

'Those that seek to use what's going on at the moment in Liverpool to further their racist agenda will be dealt with robustly'.
'People feel they can sit behind their curtains on a computer and start putting emotive language and claims on Facebook that can result in people gathering for what would appear to be legitimate reasons but can sometimes be hijacked,' he said.
'The message from me to those people is: think about what you are putting and what that reaction may well cause if you put something inflammatory on it.
'We are, as a police service, monitoring all the sites. Where we see things that are inflammatory or trying to incite or corral people for criminal activity, we will act.'

Who determines what is “inflammatory”? After all, it must be borne in mind that simply to criticise Islam is deemed “inflammatory” by the majority of people who call themselves Muslims. I consider Islam itself to be “inflammatory”, so by such logic, should not all those who profess Islam be monitored? Whose sense of offence trumps the other’s?
With such a serious issue as Mohammedan paedophile grooming wrecking the lives of hundreds of English girls, why is it that our Prime Minister David Cameron should instead choose to spend his time hosting a football anti-racism summit, rather than tackling the former issue? Certainly, it is unpleasant for anyone to be personally insulted through being the object of verbal abuse of whatever kind, but are the sensitivities of multimillionaire footballers really more important than the lives of young teenage girls, their happiness and well-being seemingly expendable simply because of their class and their English ethnicity? Is the safety of these girls to be deemed less worthy than the cause of “community cohesion” (i.e. winning the Muslim bloc vote)? Is the self-respect of a professional footballer really worth more than the life of Danny O’Shea or the broken bones of Daniel Stringer-Prince? The Prime Minister, for whatever reason, lacks both a sense of proportion and perspective. Will he ever comprehend the lives of ordinary English people who live outside of his cosseted Westminster world of privilege?
Riot Vans in Heywood 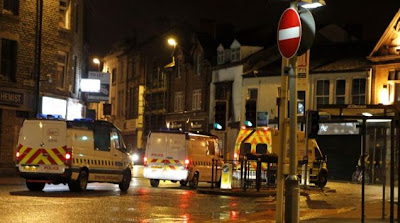