Uncomfortable in their own Skin

Friday’s attempt to break the world record for mass participation dance should have been spectacle enough in itself, yet the sight that beheld Plymothians proved to be jaw-dropping for quite another reason. According to The Plymouth Herald, children from a number of local schools took part in The Big Dance overseen by Plymouth Dance, with more than 200 participating in the city’s Piazza, whilst a further thousand danced elsewhere across the city. This therefore was no ordinary Saturday, but what was it that proved to be so visually arresting and unusual about the group of dancers in the city centre?

For some bizarre reason, three of the boys leading the group had been made to don black masks. Why? It was not, to the best of my knowledge, some homage to The Black and White Minstrel Show, so just what was going on here? Why were these children compelled to black up? Who made them do this? What underpinning rationale was offered? Does anybody know? Do you know?

Unlike many of our cities, Plymouth possesses a generally relaxed atmosphere and remains essentially English. Like anywhere, it has its problems of course, and Union Street at night can get a little unruly, but the sense of edgy unease that is palpable in many of our ethnically fragmented urban areas is lacking here. It would seem perhaps that the decision to compel the boys to black up was taken precisely because Plymouth, and Devon more widely, are English. The English, like other closely-related northern European peoples, are of course white. Why this should be perceived to be in any way problematic or contentious is beyond me, but for some people of a globalist inclination it clearly is. Were the black masks supposed to embody the racially dubious assertion that blacks possess natural rhythm whereas whites do not? Were they supposed to make the crowd of dancers look, to borrow Greg Dyke’s dreadful phrase, less ‘hideously white’? Whatever the reason underpinning the use of these peculiar props, what impact must they have had upon the psychology of the boys wearing them, upon their fellow dancers and those who saw them? Were they not used to make them feel, quite literally, uncomfortable in their own skins? Was it any more legitimate than forcing young Nigerians in Lagos to dance ballet wearing white masks, or for Zulus studying science to white up? Such would seem to be the absurd message implicit in yesterday’s display.

Devon is a beautiful county which largely retains its distinctive character, yet it would seem that for some this distinctiveness and the rootedness of its population is in itself something to feel ashamed of, as exemplified in Emma Thompson’s ugly outburst at Exeter University in 2010, when she stated that the city and Devon were too white. How strange. How insulting. Has anyone ever heard this woman aver that Nigeria is too black; Japan too yellow, or Pakistan too brown? I have not heard her call for these countries to be made more white, or state that she finds it odd that their populations are drawn predominantly from their native ethnic and racial groups. The ethnic and racial masochism displayed by Thompson would appear to have been what bubbled to the surface and found expression once again on Friday in Plymouth. The propagation of this misplaced sense of white racial guilt and self-loathing must be stopped. My message to those children who took part would be this: ignore what your teachers tell you about race; there is no reason to feel guilty about being white. Feel comfortable in your own skin, and don’t feel that you have to wear a black one to be able to dance.

Plymouth Boys forced to black up 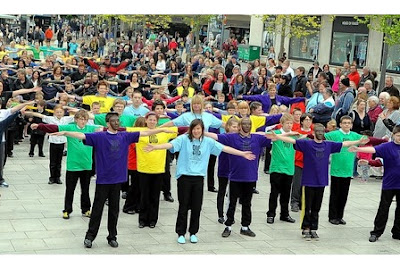