Thilo Sarrazin has already caused controversy in his native Germany with the publication of his book ‘Germany abolishes Itself’, and his latest book - Europa braucht den Euro nicht ('Europe doesn’t need the Euro') - appears set to ruffle yet more feathers, for in this he calls for Germany to leave the Euro and reintroduce the Deutschmark. Moreover, he thinks that the Euro itself was a flawed concept. Quite rightly, he also calls for an end to Germans’ obsessive soul-searching over Auschwitz and the Holocaust; those responsible for these crimes are long dead, and Germans today have no reason to feel guilt for these atrocities which have cast a pall over their nation. It is this, to a considerable extent argues Sarrazin, that has driven Germany’s quest for European economic and political union, but this has been misguided and should end. Germany has no moral obligation to carry the rest of Europe upon its shoulders.

Owing to Sarrazin’s position as a senior and respected mainstream political figure, he has been able to make politically incorrect yet factually objective statements about Islam, mass immigration and the EU, which others may have been afraid to make for fear of damaging their careers and attracting a degree of official opprobrium. Unfortunately, Sarrazin’s political home – the SPD – generally finds his views on these themes unpalatable, and he has already been described as 'nationalist and reactionary', but the Germans find themselves in a lucky position to possess such a figure, for in Britain we do not have any politician of his stature willing to acknowledge or to speak the truth on these matters.

At a time when the national contradictions within the Eurozone are beginning to threaten the long-term viability of the currency, two major responses have emerged: one being a call for tighter fiscal and political integration versus the demand for the exit of a number of states from the Eurozone presaging its potential dissolution. As in the former Soviet Union where differences in regional economic development, culture and national sentiment eventually manifested themselves in the fragmentation of the state, it would seem that the days of the EU could be numbered as the same centrifugal forces come into play. The terminal crisis of the USSR was precipitated by the collapse of its economic model, and a similar crisis could now be underway for the EU as its existing economic and political structures prove maladapted to the welfare of the continent’s different peoples and the functioning of its distinctive economies.

The fall of the Soviet Union was confirmed when Gorbachev’s reformism precipitated a backlash from hardliners within the CPSU who launched an attempted coup in August 1991. It was Boris Yeltsin’s decisive action as President of the RSFSR, drawing upon a growing undercurrent of democratic Russian nationalism that led to the coup’s defeat, and at the end of the year to the dissolution of the USSR itself with the creation of the Commonwealth of Independent States. Defenders of the EU and its tightly intertwined projects for economic and political union appear, as was the case with the Soviet hardliners, determined to use almost any means to preserve their cherished political dream. Much of their legitimating discourse is reliant upon invoking the demons of the continent’s past and claims that opposition to the EU project threatens a “return to the extremism of the 1930s”.  This is a disingenuous deeply nasty slur upon the integrity of those of an anti-globalist democratic nationalist disposition in all European nations, who crave not the jackboot, as the proponents of the EU project claim, but national self-determination and its attendant values of genuine freedom, democracy and liberty.

The new anti-globalism growing across the constituent nations of the EU today shares more in common with the late- and post-Soviet nationalisms of peoples wishing to break free from the shackles of an anti-democratic supranational state, than with the ugly authoritarian and inhuman fascistic perversions of nationalist sentiment of the 1930s. Sarrazin is but one figure, albeit a highly prominent one, willing to give voice to this new mood today. Globalisation and globalism have reached their apogee, and from hereon, the future will belong to the proponents of a new popular, progressive and democratic anti-globalism. Let all nations flourish in a state of amity and concord, and a celebration of global cultural pluralism replace the corrosive anti-European concept of multiculturalism. 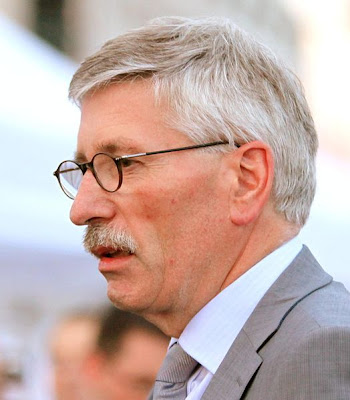