Today the EDL is holding a demonstration in Luton to mark the third anniversary of its foundation. Unsurprisingly, UAF and the SWP are holding a counterdemonstration (badged as 'We are Luton'), as has become traditional upon such occasions. According to the Casuals United blog (hat tip for the picture below), some 2,000 supporters have taken to the streets of Luton. This also coincides with the long-anticipated official announcement regarding Stephen Lennon/Tommy Robinson joining the British Freedom Party (BFP) as Deputy Chairman. It has been announced that he will be sharing this role with Kevin Carroll. Quite how effective that arrangement proves to be remains to be seen.

Yesterday witnessed the first electoral test for the BFP, and as can be seen from the results at this link, it fared spectacularly badly. Although those who head both the BFP and the EDL hope that today's announcement will provide a boost for the former, it has already prompted the departure of a number of BFP members. However, what is beyond dispute is the fact that Stephen Lennon's decision to join the BFP will generate headlines and afford the party far more coverage than it has hitherto enjoyed. Although Matthew Goodwin correctly observed in The Guardian yesterday that the BNP was spent as an electoral force and should now be considered a political irrelevance, he perhaps places rather too much store upon the potential success of an EDL/BFP tie-up, owing to the numerous reasons outlined in previous articles highlighting the weaknesses both of this strategic approach and of the BFP's policies and presentation (a detailed criticism of its 20 Point Plan can be found here).

Luton of course has acquired a reputation for radical Islamism, with the most recent arrest for terrorist-related offences taking place towards the end of last month when five men in the town were detained in police swoops. It is therefore not surprising that Luton was the town that gave birth to the EDL, and this fact has in recent months drawn considerable media coverage, most notably in two documentaries looking at ethno-confessional polarisation in the town: Stacey Dooley's lightweight 'My Hometown Fanatics' and the rather more serious but partial episode of Despatches 'Proud and Prejudiced'. Both of these came after a special Radio 4 report on the town last September, featuring interviews conducted by John Humphrys with Stephen Lennon and Sayful Islam amongst others.

The following video gives a flavour of the EDL demo today. 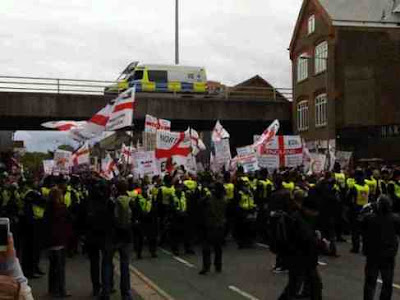