As the economic decline of the West continues, and individuals who joined trade unions look to them to protect their jobs and working conditions, many trade union activists dedicate themselves to concerns that are tangential, if not in direct opposition to, the beliefs, desires and interests of rank-and-file members. Thus it is that many union stewards and reps abuse their positions of trust to forward their own militant Leftist agenda. They undermine the job security of indigenous members by actively promoting ever more mass immigration (legal migration, ‘asylum’, recognition of the ‘right’ of illegal immigrants to remain in the country, ‘family reunion’, Turkish accession to the EU, etc) as well as subverting the identity of the country by engaging in a vigorous Kulturkampf which promotes Balkanisation under the heading of ‘diversity’, routinely brand expressions of English identity as ‘racist’ and ‘extremist’, and support the growth of the misogynist, anti-rational Dark Age belief system called Islam.
What I have written above is a statement of fact. I do not believe that there is any room for this to be disputed. That said, I do not for one moment tar all trade unionists with the same brush, and recognise that there are many excellent stewards and reps who do a good job in seeking to defend the interests of their members and do not become involved in the harmful abovementioned activities that are embedded within the official policies of their unions. It is up to people such as these to win back the trade union movement for reason, and to defend the real interests of their members rather than undermining the latter’s economic security and stigmatising their indigenous cultural identity. I call upon decent trade unionists who do not subscribe to erroneous Leftist multiculturalist dogma to make their displeasure known to colleagues about the union-sponsored UAF demonstration promoting Islamisation and supported by the Muslim Defence League (MDL) that will take place in Newcastle on 29 October this year.
The title of the event itself – Rising Against Islamophobia – is both provocative and designed to promote the myth that objecting to Islamic doctrine and Islamisation is irrational. Indeed, the aim of the organisers is to stamp out independent thought and to impose a totalitarian line: this is the ‘truth’, and if you question it, you are a ‘racist’, ‘fascist’ and ‘far-right’. Even if you are a trade unionist who does not share my particular perspective, you ought to feel distinctly uneasy about the line and tactics of UAF.
Unison appears to be the major union backing the event, but the following campaigns, groups and individuals will also be represented:
How much will this promotion of Islam cost non-Muslim trade union members? This event will after all require funding. At a time when jobs are being lost and services being degraded, why are scarce resources being wasted upon promoting an alien and hostile creed that stands in direct opposition to the values of most ordinary trade unionists? It is time that rank-and-file members awoke to the fact that their movement has been hijacked by Trotskyites intent upon using it for purposes other than what it was established.
The EDL will be holding a counter-protest to this celebration of national self-destruction, cultural masochism and Islamisation. Let us hope that they enjoy a successful and peaceful demonstration, and that ordinary trade unionists are able to win back their movement from the harmful pro-Islamic fanatics who have subverted its noble founding principles. 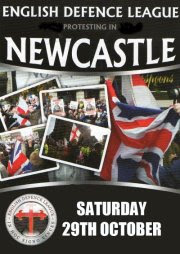