Bloc Identitaire stage “Die in” against anti-white Racism in Dijon

Let us for a moment imagine the following situation: you have travelled to the centre of an attractive provincial city for the afternoon, and whilst you are walking along a pedestrianised street you suddenly see a small group of people. All are dressed similarly, and walk but briefly before calmly assuming prone and supine positions on the street, as if dead; clothing spattered with red, suggesting blood. Their silent forms lie still, bringing to mind the plaster casts of the victims lost to the Vesuvian eruption of AD 79. Another member of the group appears with a megaphone, places signs on their bodies and starts to address the shoppers. What is going on?
The French political group Bloc Identitaire is innovative and unorthodox, as was reflected last Saturday in its novel approach to highlighting the phenomenon of anti-white racism with reference to the specific case of a recent racially motivated murder in Dijon, about which the authorities have chosen to remain silent. A group of activists took their message to the centre of Dijon through employing an eye-catching piece of street theatre – a “Die in” against anti-white racism. This was followed by a leafleting session distributing the flyer shown below entitled ‘Open Season for hunting Whites in Dijon!’
Having watched the video below, consider this: would it have been possible to do something such as this in the UK? Somehow, I suspect that had anyone chosen to highlight anti-white racism in such a fashion here, they’d probably have found themselves promptly arrested and charged with ‘inciting racial hatred’. What follows is a translation of the Burgundy Bloc Identitaire press release and video of the “Die in”.

Press release dated 4 September, Bloc Identitaire
Lie-down against anti-white Racism: “Die in” Identitaire in Dijon
Last week, a young European of 15 years of age was lynched by an ethnic gang in the very centre of the city of Dijon, to cries of “Let’s hunt some white”. This racist aggression takes place in a context of the increase in anti-white racism everywhere in France.
Contacted by telephone several times by identitarian militants, neither the municipality of Dijon nor the Prefecture nor the deputies have wished to publicly condemn this racist aggression, using as a pretext the fact that they are awaiting the outcome of the inquest. Yet, when it happens that such aggression touches the African, Maghrebian, Jewish or Asian community, the condemnation by elected representatives of this racism is then immediate, whether the inquest is ongoing or not.
In response to the unhealthy silence of local elected representatives, this Saturday 3 September in the middle of the afternoon, a dozen identitarian militants met on the Rue du Bourg, then packed full of passers-by, so as to perform a “die-in” in the middle of the crowd. This theatrical performance was aimed at heightening the awareness of the people of Dijon to the existence of an anti-white racism. The meaning of the militants lying on the ground, their clothes stained with blood, bearing the signs “Anti-white racism kills”, wasn’t lost on the numerous passers-by.
Then seizing the megaphone, the reality of anti-white racism was explained, enumerating identical acts of aggression, often lethal, which have struck the French of European origin these past years. Finally, several hundred leaflets denouncing the mute silence of local elected officials were distributed on the spot, then to neighbouring café terraces, as well as on the windscreens of parked cars.
The Identitarians of Burgundy will continue to appeal totheir networks of sympathisers, and will multiply their actions ofconsciousness-raising, so that they call for the accountability of our electedofficials, and that until there is an official condemnation, firm anddefinitive of the anti-white racism on their part. 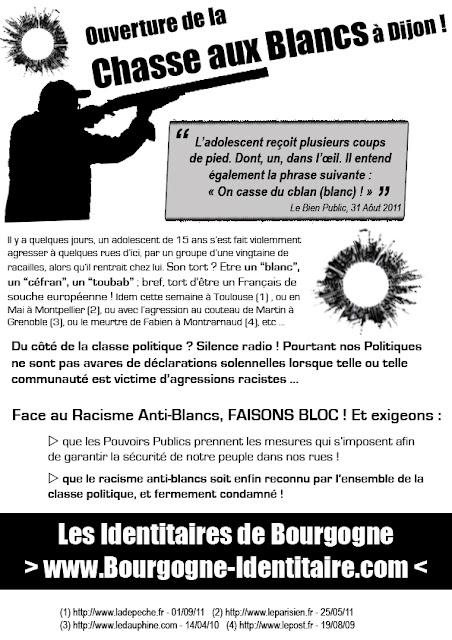