Today’s announcement of the proposed details of the second phase of the HS2 route has been touted by George Osborne and Nick Clegg alike as a good thing, and a project that will assist growth, particularly in the regional cities with which it will link up. The twin spurs leading out from Birmingham will radiate up to Toton (near Nottingham), Sheffield and Leeds on one branch, and to Manchester and Manchester Airport on the other. This apparent enthusiasm should not come as a surprise, given that many politicians seem to possess a weakness for prestige projects, and projects don’t come much larger or more prestigious than HS2. Generally speaking however, such undertakings smack of gigantomania, but whereas its construction may not prove to be as wasteful, pointless or brutal as the White Sea Canal, it could yet prove to be more costly and of less utility than the Channel Tunnel, which in itself returned a loss for a number of years and came in well over budget, costing (according to one source) almost £12 billion rather than the originally projected £4.9 billion.

The current price tag attached to HS2 is £32 billion, but what will be the real cost? How often do projects of this magnitude come in on budget? In practice, it is likely that the budget required for the construction and initial operation of HS2 will grow considerably as the years progress. Beyond this of course, there are the additional costs incurred in terms of environmental destruction and degradation, and the possibility that London will suck yet more lifeblood out of our regional cities rather than pump forth a surge of vitality. The thinking underpinning HS2 is distinctly metropolitan and damagingly London-centric, and many voices of opposition have been raised beyond those whom one would normally expect to object, such as 70 MPs.

Much of the thinking underpinning HS2 is fundamentally flawed, for the assumption is that time spent travelling on trains is dead time lost to productive employment, whereas we are now all aware that this is no longer the case thanks to the revolution in communications technology that allows us to work using our mobiles, laptops and tablets whilst on the move. Thus, does cutting the journey time from Manchester to London from two hours and eight minutes to one hour and eight minutes, and from Leeds to London from two hours and 20 minutes to one hour and 22 minutes really merit a minimum investment of £32 billion? These figures, particularly during our severely straitened times, appear to be frighteningly wasteful. If perhaps, we could guarantee that all of the steel, cement, signalling and rolling stock used in the creation and operation of this proposed new network were to be British produced and British owned, and the intellectual and manual labour employed likewise to be domestically sourced, then perhaps a case of sorts could be made for its construction, given the positive economic effects that it would generate. However, the likelihood is that it will not be: the network’s construction could well instead lead to an increase in the balance of payments deficit.

Furthermore, the routing of the new network means that the ‘Nottingham’ and ‘Sheffield’ stations will not be in the city centres, with Nottingham’s being situated at Toton (no, I’d never heard of it either) and Sheffield’s at Meadowhall (do they intend to try and lure away shoppers from London’s Oxford Street?). This will mean that travellers will then need to board connecting services to reach the city centres, so the time saved is even less than that being claimed by advocates of the development. When will it be completed if all goes to schedule? Not until 2032 to 2033, apparently. 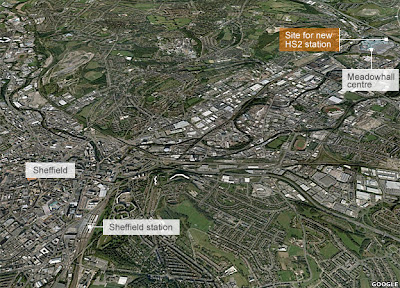 Rather than ploughing such vast sums of money into an economically wasteful, London-centric prestige project, this investment ought to be used instead to upgrade regional rail networks and rolling stock, re-opening a number of lines closed by Beeching where this is still practicable to ease the pressure on our roads. Far more could be achieved in this way, and would be far more likely to yield a meaningful improvement in transport for the residents of our northern cities as well as laying the basis for prosperity in the regions. This is something championed by the Campaign for Better Transport which advocates the reopening of the Skipton to Colne rail link and the reinstatement of the line from Portishead to Bristol amongst others.

The opponents of HS2 have produced a website – StopHS2 – which sets out a number of persuasive arguments and figures in support of the campaigners’ assertion that the project is both wasteful and damaging. As yet, a decision upon whether to allow the construction of HS2 will not be made until next year, so although the go-ahead is not a foregone conclusion, the campaigners are going to have a tough struggle ahead of them in fighting the interests of the powerful lobby groups pushing for this ‘development’. Let’s hope that they succeed!