The Telegraph and Argus today ran with a prominent report on local MP Kris Hopkins’s contribution to the House of Commons Home Affairs Select Committee’s inquiry into child grooming. Although it does not describe itself as investigating Muslim child grooming, which would be the case if this phenomenon were no longer being treated in a politically correct fashion, this is in effect what it is examining, following the recent scandals connected to such practices in Rotherham and Rochdale. Indeed, whilst this inquiry takes place the nine Muslim men arrested as part of Operation Bullfinch are standing trial for perpetrating this sort of crime in Oxford over a number of years.

Hopkins stated that over the past two months 30 people had been arrested in the Bradford area in connection with grooming crimes, and that there are also a number of “ongoing cases”. However, according to the Telegraph and Argus, he claims that this crackdown was evidence of the fact that ‘the days when alleged “political correctness” made the authorities reluctant to act were gone.’ Ann Cryer, an earlier incumbent of Hopkins’s Keighley and Ilkley seat, has also appeared before the Committee. She is quoted by the Yorkshire Post as stating that the inter-agency working necessary for tackling this and related problems simply “wasn’t happening” when she was an MP. Moreover, she drew attention to another repellent cultural aspect of the ‘community’ from whose ranks the grooming gangs originate:

The West Yorkshire Police, Bradford local authority, social services, schools, hospitals even – because abortions were taking place – none of them were working together. None of them were giving information. I feel pretty convinced that at that time there was a fear of being called a racist.

There still is such a fear Ann. Ask anyone who works in the public sector and who has to pay at least lip service to the irrational diversity dogma that is thrust upon us. Criticise Islam or associate any negative practice with it and you’ll find yourself in pretty damned hot water very fast. If you offend a Muslim colleague in this manner you can kiss goodbye to any prospects of career advancement. We live in a self-inflicted climate of fear thanks to the legislation that emanated from the thoroughly wrongheaded Machpherson Report and its invention of the fictitious crime of ‘institutional racism’ and the extension of the term ‘racism’ to include criticism of negative practices conducted predominantly by ethnic minorities.

Although Ann Cryer has over the years done much good in trying to draw attention to this form of paedophile grooming, the local Labour Party that she represented was at least initially reluctant to publicise the true extent of this ugly reality, and it is unfortunate to say that at that time it took the actions of the BNP to flush this scandal out into the public arena. Similarly, it does beg the question as to how seriously Hopkins et al would be taking the gang grooming phenomenon were it not for the series of noisy protests mounted by the EDL across the country, including in Keighley, Rotherham and Rochdale. Whether you happen to agree with their tactics or not, they have helped to bring this ugly phenomenon to the attention of a wider public, no matter how unwelcome that might be to certain Westminster politicians eager not to ‘offend’ the Muslim bloc vote. One can only conclude therefore, that given the sluggishness of Westminster politicians to recognise the nature and extent of this type of criminal behaviour and their ongoing inability to name it for what it is – Muslim paedophile grooming – political correctness reigns supreme. Only once we are rid of the intellectually and morally corrosive effects of the Macpherson Report will we be able to deal with this problem properly, and root it out once and for all.

Alas, what does BBC3 offer us tonight? ‘Make Me a Muslim’. 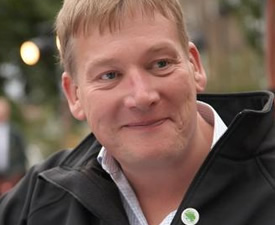