According to an article appearing in today’s Le Monde, Marine Le Pen is in buoyant mood following the publication of an Ispsos poll of French public opinion in yesterday’s edition of the paper. Why? Well, in Le Pen’s own words, it shows that “the French think like us”. Specifically, it would appear that Front National attitudes and policies with respect to immigration, Islam, globalisation and economic protectionism strike a strong chord with the French electorate.

Overall, the French public is not in an ebullient mood, with the poll suggesting the prevalence of a distinctly pessimistic worldview. That this should be so ought to come as no surprise, for France, like the UK, does not currently find itself in a happy situation either economically or socially. The pie charts reproduced below provide a striking summary of the twin mood of economic and cultural decline that appears to have taken root: 55% of respondents thought that French economic power “has declined a great deal” and a further 35% believe that it “has declined a little”, with only 7% thinking that the economy “has progressed a little”. In the cultural sphere, the mood remains negative, but not in quite so pronounced a fashion as with respect to the economy: 23% thought that French cultural influence “had declined a lot” with a further 40% stating “that it had declined a little”.

In factually rather than politically correct fashion, 74% of respondents in the poll subscribed to the notion that Islam was an “intolerant” religion; 77% stated that “religious fundamentalism” (code for Islam) was a matter of concern to them; 57% were of the opinion that “anti-white racism is quite common in France”, and 62% “no longer feel at home in France”. Data are not provided with respect to ethnic and faith differences amongst respondents, but the results clearly indicate that France is a cleft society, with a significant proportion of indigenous French citizens feeling a distinct sense of cultural alienation from their own homeland because of the momentous changes wrought by mass immigration in recent decades. My sympathies on this score lie with the French. Whether or not the French have lost Paris as the English (or indeed, the British) have lost London, I do not know, but similar processes driven by the twin ideologies of globalism and permeable borders are leading to a crisis of national self-identity in both countries. However, to express this sense of alienation from one’s own homeland and the political class who implement and advocate the policies that lead to this dispossession is to run the risk in both the UK and France of being branded a ‘far-right extremist’, which is of course a deeply malicious and wounding slur upon the part of those who level it.

One commentator – Michel Winock – described by Le Monde as a “specialist in the history of politics and ideology in modern France” has used the findings of this poll to make tired and lazy comparisons with France in the 1930s, raising the hoary old spectre of recrudescent ‘fascism’ that is so often wheeled out by defenders of mass immigration and state-sponsored multiculturalism on either side of La Manche when confronted by popular distaste for these two elite-sponsored projects. To equate a desire for national self-preservation and cultural distinctiveness with ‘fascism’ is repugnant, but that does not prevent the likes of Winock from seeking to firmly implant this false association in the public mind with the assistance of a largely eager and compliant mass media.

In conclusion, the policies forwarded by the Front National chime strongly with the concerns of native French voters, but thus far the party has not been able to make a significant electoral breakthrough. What then, will it take for French voters to give voice to their dissatisfaction by voting for a party that offers policies that they favour, and for them to overcome their aversion to voting for Le Pen inculcated by many years of deeply hostile coverage of the FN? 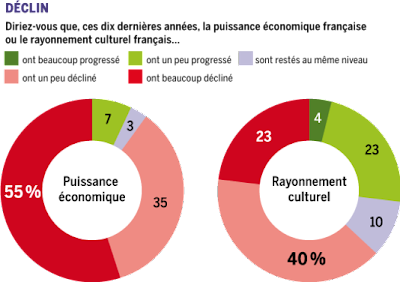