A Wharfedale Oddity: 'Tents will be shifted'

Given that there isn't a great deal in the news that would currently raise a smile, I thought that readers might appreciate this snap that I took the other year whilst out for a stroll in the Yorkshire Dales. The sign affixed to the tree is perhaps the oddest that I have stumbled upon, situated as it is in a place where few campers, presumably, would wish to pitch their tents unless they happened to be adept at aqua camping (although come to think of it, the potential pitch displayed in the picture is little wetter than many campsites must have been during the 'summer' that we recently endured). Given the proclivity of many people to engage in extreme pastimes these days, there could indeed be such a thing as aqua camping, but I have not yet seen it mentioned elsewhere.

The phraseology employed in the sign seems to capture perfectly the grumpiness of the local Yorkshire farmer, aggrieved at tourists pitching camp at the water's edge without making a suitable donation to his purse. 'Tents will be shifted' it gruffly states, but what of their occupants? Would they be bound for an involuntary dunking? "Aye! 'Appen!" 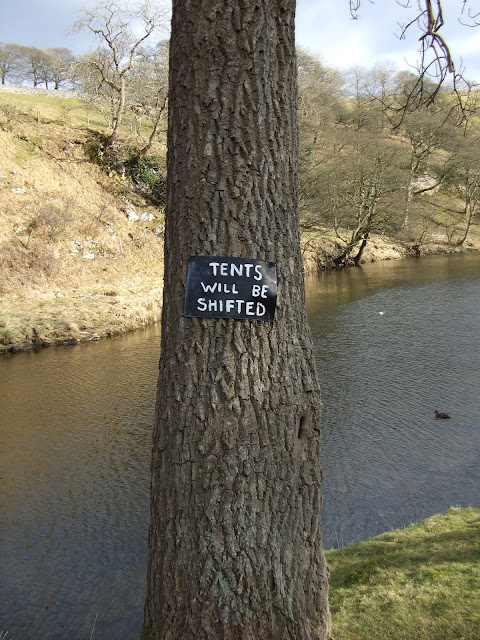