Mitt Romney: the Defeat of a Russophobe

Whatever your opinion of Obama and Romney, one thing is clear following Obama’s re-election as US President: we may breathe easily insofar as Romney’s potentially disastrous approach to foreign affairs will not now be realised. The Cold War will not be reanimated.

Romney posed as a patriot, and yet he had been instrumental in the mass offshoring of US jobs; he presented himself as the international strongman, advocating significant increases in defence spending, whilst undermining the US economic base through his promotion of globalism and domestic deindustrialisation. Romney either lacked the intellectual capacity to recognise that Russia is not the US’s “main foe”, or cynically used Russia as a convenient bogey, attempting to whip up a pointless Russophobia as a means of harnessing the sense of domestic disquiet over the US’s geopolitical decline.

Mitt Romney has failed in his presidential challenge. The nations of Europe will be safer as a consequence. 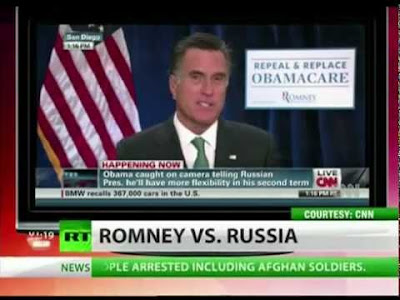 Email ThisBlogThis!Share to TwitterShare to FacebookShare to Pinterest
Labels: Russia, US Politics