In what would appear to be an interesting parallel to the recent behaviour displayed by Muslim voters in Bradford West and their election of George Galloway, Al Jazeera notes that in today’s first round of the presidential election French Muslims are ‘likely to vote for the far left’. It notes:

Throughout the duration of the campaign for France's presidency, one issue has come up over and over again.

Islam, and whether it has a place in French society, has been a favourite issue of the two right wing candidates, the National Front's Marine Le Pen and Nicolas Sarkozyof the Union for a Popular Movement (UMP).

France’s Muslim population is even larger than that of Britain’s both in terms of its overall size and share of the national total, and as has occasionally been documented on the pages of this blog, concern over cultural and demographic Islamisation has been growing in France, wedded as it is to its central national idea of laïcité, an approximate translation of which is secularism. Given the tenets of doctrinaire Islam, the two were bound for inevitable collision, resulting in agonised national debates over the veil, the burqa, minarets, praying in the streets and most recently the unwitting consumption of halal meat, particularly in the Paris area, by ordinary Frenchmen and women. One opponent of Islamisation - Christine Tasin - even received a fatwa demanding her death for her robust secularist stance, so the debate about secularism in France does possess a real implications for the lives of the country's citizens; it is not some petty theoretical debate.
Marine Le Pen has not been backward in articulating popular concerns over the various facets of Islamisation, and although doing reasonably well in the opinion polls, having often scored in the high teens or low twenties, unfortunately does not appear to be on course to participate in the second round of the presidential context. If allegations published on the GalliaWatch blog relating to Le Pen ballots being withheld from 16 departments in France as well as from many voters resident overseas prove to be true, her vote could be considerably lower than anticipated. Instead, it would appear that Sarkozy will go head-to-head with the Socialist Party candidate François Hollande, with the two being almost neck and neck in recent polls. Who wins will very much depend upon where Le Pen’s and Jean-Luc Mélenchon’s (the Left Party candidate) supporters cast their votes in the run-off. The majority of Muslims however, have made it quite that Sarkozy will not secure their support because of his perceived ‘Islamophobic’ attitude and pronouncements (in reality Sarkozy talks tough but does little so as to undermine support for Le Pen). This is very much in line with the presidential elections of 2007, for as The Washington Times observes:

In April 2007, polls found that French Muslims voted mainly for the Socialist presidential candidate: Segolene Royal won 64 percent of their vote, while Mr. Sarkozy got just 1 percent in the first round and 5 percent in the second.
“People who would have originally voted for the center or the right-wing are now determined to vote against Nicolas Sarkozy,” Ms. Lorcerie said.

So it therefore seems likely that Muslim voters in France will throw their support behind Moroccan-born Jean-Luc Mélenchon today, and then François Hollande in the second round. George Galloway and Ken Livingstone are but the most notable politicians to have participated in the creation and the exploitation of the Muslim bloc vote in Britain, and it would appear that a parallel process could be underway in France. Could it be that across Europe a pattern is emerging in which Muslims are casting their votes en bloc for particular candidates and parties that specifically pander to their demands? Will this register with the rest of the electorate? The Washington Times notes that it has certainly registered with sociologists:


France’s Muslim community is mobilizing voters to reject President Nicolas Sarkozy in Sunday’s election to punish the conservative leader for his anti-immigrant and anti-Islam rhetoric.
“[French] Muslims can’t stand it anymore. They are fed up with these debates about national identity, halal meat, the veil or fundamentalism all over the place,” said Francoise Lorcerie, a sociologist with the Institute of Studies on the Arab and Muslim World near Marseille.
“The terms [Islam, immigration and fundamentalism] are being used interchangeably, without care, with people being targeted, denigrated and used for [votes].” 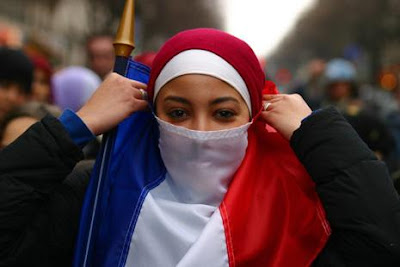