Bradford May 2012: a Respect Breakthrough?

On Thursday 3 May Bradfordians will have the opportunity to go to the polls not only to vote in the local council elections, but also in a referendum as to whether the city should opt to elect its mayor. Now that George Galloway, through his dramatic victory, has demonstrated the potential of Islamic sectarian politics in certain parts of contemporary England, we may see wins for Respect in a number of Bradford wards now that he has declared that the party will field candidates in every ward. Galloway has certainly built up a head of steam for his party, and has generated much enthusiasm amongst the city’s Muslim population, even going so far as to win the backing of its mosques. Indeed, his efforts to tailor his message to this section of the electorate were quite remarkable, as is evidenced both by the letter reproduced below and the campaign speech at the end of this piece. If you possess neither the time nor the inclination to watch Galloway’s speech, you should certainly not omit to read his letter, for its content has to be seen to be believed. 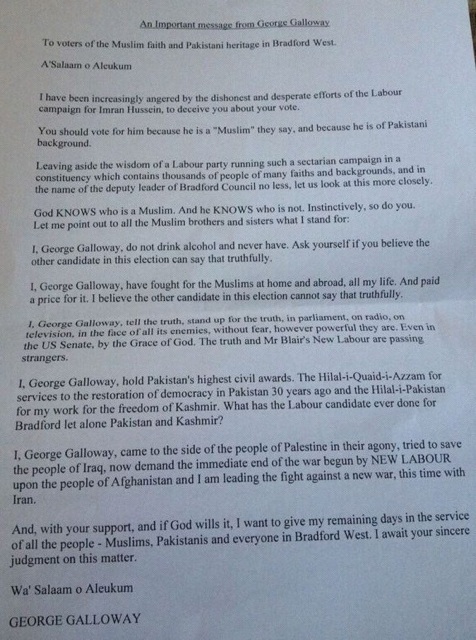